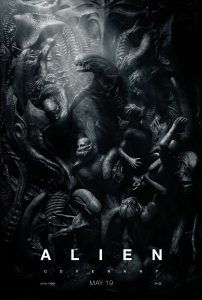 Since 2012’s highly ambiguous Prometheus, speculation has been mounting over the inevitable sequel and what it means for the expanding Alien universe. Here we are five years later fresh off the release of Alien: Covenant, which follows the crew aboard a colony ship who discover an uncharted planet harbouring not only a fertile world, but a threat no one could have anticipated nor conceived.

Despite being an overall decent instalment that will no doubt greatly appeal to a sizable portion of fans, a repetitive narrative and an all too familiar formula made Alien: Covenant feel like we were on lay-over before our journey towards something more momentous and satisfying. Most disappointing for me was having to watch a certain character be taken down a rather sinister path as opposed to keeping the viewer you guessing over what are his true intentions. On a more positive note, the film does manage to bridge much of the mythology from Prometheus over to what we know as the most classic traits and portrayals of the alien creature known as Xenomorphs. Some plots holes still linger, but will almost certainly be filled during subsequent sequels. Interestingly there’s a rich subtext to this piece that challenges one’s idea of paradise, and delves into a extremely dark metaphor of the man’s downfall as depicted in polemicist John Milton’s biblical story, Paradise Lost (which was actually the film’s original title). These morbid themes are stimulating for the more perceptive viewers and are very befitting to the visual style and extreme horrors unleashed upon our unsuspecting visitors. Michael Fassbender in the dual role as android David/Walter turns out an impressive performance once again while Katherine Waterston takes on the signature ‘Ripley’ persona, embodied by Sigourney Weaver decades prior.

Where we go from here is uncertain and with much of the mystique surrounding this series now gone, it will take a good amount of creative spark to regain my enthusiasm. Nevertheless, it sure was a treat to see the ominous title gradually form before my eyes on a cinema screen, just like the classic 1979 original on my parent’s TV.