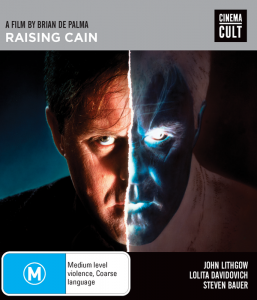 Often regarded by fans and critics as Alfred Hitchcock’s successor, Brian De Palma is a prolific filmmaker with a career spanning multiple decades and genres, sometimes with less than desired results. His demented 90’s thriller Raining Cain resurfaced on Blu-ray earlier this month from Cinema Cult, somewhat of an obscurity next to the more popular and widely recognised classics like Blow Out, The Fury and Carrie. John Lithgow stars a prominent child psychologist who has an unhealthily scientific obsession with his young daughter, which stems from something deep within his mind and past.

With more shots of characters waking up than in A Nightmare on Elm Street, watching the film proved to be a rather confusing experience with no clear direction established until well into the latter half. Having said that, the ingredients for an interesting story are there and while the chaos that unfolds often verges on the bizarre and requires a few big leaps in logic, I definitely wasn’t for bored and walked away feeling that I’ve seen something very out of the ordinary. John Lithgow is an erratic mess as our lead, Carter, plagued with past trauma and a sophisticated mental aliment, which certainly brings variety if you catch my drift. His wife Jenny on the other hand, played by Lolita Davidovich, is tied into an extra martial subplot more suited to a daytime soap that unfortunately amounts to very little.

Some chilling references to Psycho and a trademark De Palma slow-motion sequence add to the sinister nature of Raising Cain, a psychological thriller in several minds delivered in with crisp picture and sound from Cinema Cult despite a lack of bonus content. However, I commend their choice and continued advocacy for lesser known cinema.