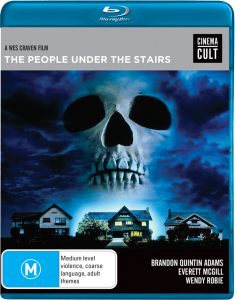 Home invasion horror has long been a popular sub-genre with titles such as You’re Next and Don’t Breathe proving big hits in recently years. However, while most take a serious rout, Wes Craven capitalised on the child-friendly Home Alone with his the outrageous and utterly bonkers The People Under the Stairs, released on Blu-ray under Cinema Cult earlier this month. Desperate to help his poverty stricken family, a young boy named Fool (Brandon Quintin Adams) is coaxed by two unlawful adults into helping them rob the home of their wealthy, but reclusive landlords, who have devilish surprises for unwanted trespassers.

The People Under the Stairs is a horror film that gains momentum very quickly and is quite literally wall-to-wall madness, so I advise resisting any urge to press pause on your remote. Our two home-owners, a maniacal brother a sister played by Wendy Robie and Everett McGill waste no time in turning the tables on their intruders, exposing them to the dark secrets they keep locked below. Brandon Quintin Adams certainly holds his own as the film’s young star and hero, trying to evade capture through a labyrinth of passages and cavities between the walls, in what are well-designed and often disorienting sets pieces. Modelling a house within a house in a brilliantly macabre and other-worldly fashion gives The People Under the Stairs a creative edge. Our unhinged siblings provide many laughs through their blatant level of insanity, particularly Everett McGill who is regularly seen blasting away at the walls with a pump-action shotgun while dressed head-to-toe as a gimp. Wendy Robie is especially batty as the twisted home-maker, barking commands and torturing her captive daughter Alice, played by A.J. Langer. While not so much a pivotal part of the plot, the titular hidden individuals are a constant and eerily mysterious presence, which allows the film to journey further into darker territory.

Not known for including bonus material, Cinema Cut are more often than not successful in source quality transfers for their releases, and this early 90s classic is no exception. Picture is crisp and brings out numerous shades of red and other unsavoury colours during the film’s more gruesome moments, while sounds pack a pretty solid punch in Dolby 2.0.

Between staple titles such as The Hills Have Eyes, A Nightmare on Elm Street and Scream, there’s undeniably been a few misses from Wes Craven, but The People Under the Stairs is among his more relaxed and spacious films, providing a fun, cheesy and at times, a touching horror comedy that’s well worth adding to your collection.

Note: The People Under the Stairs is also available on DVD from Cinema Cult under Shock Entertainment.