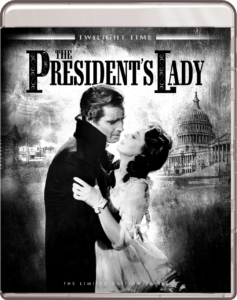 Today Andrew Jackson is regarded as one of American’s most controversial Presidents, but he’s also one of the country’s most interesting historical figures due to his humble beginnings, decorated military service, fiery temperament and rise to the land’s highest office. One of the most common talking points of Jackson’s legacy is his, at the time, scandalous marriage to a divorced woman. Despite the gossip surrounding the relationship, the president’s immeasurable love and devotion towards his life-partner Rachel Donelson is the focal point in The President’s Lady, a triumphant Hollywood biographical piece new to Blu-ray from Twilight Time Movies.

Starring screen icons Charlton Heston and Susan Hayward, this age-old story begins with Andrew Jackson, a young Tennessee lawyer, experiencing love at first sight when he comes to work and board on the Donelson family farm. After an eventful courtship, the two decide to wed, but the legality of their marriage becomes a point of contention and scandal, plaguing the couple throughout their lives. At the time this film was made, Jackson was generally looked upon favourably, although in this more enlightened age his conquest to “conquer” Native American tribes takes precedence over his achievements in office. The controversial figure is portrayed in the film as a man of respectable character and one who is genuinely fearful of being killed, but the celebration towards his victories, while accurate to the time, probably won’t sit well with modern audiences. On the other hand, the film’s primary narrative is something that would draw a lot of sympathy regarding the stigma towards divorced women, which was viscous at the time. Nevertheless, The President’s Lady is an enjoyable two hours and a nice example of Hollywood’s Golden Age with strong performances from both Heston and Hayward, who are adorable as the films enduring couple. The future Ben-Hur star seems to particularly delight in his heroic title role, an obvious admirer of Jackson. While the legendary relationship was largely a long distance marriage due to the president’s professional and patriotic endeavours, their love transcends the great expanses that lay between them. Heston displays a proud demeanour as the would-be President, defending of his wife’s honour without question, which is contested numerous times throughout the film. The constant damnation towards Hayward as Rachel Donelson is unsettling as the burden of being divorced only seems to be carried by the woman, even if her reasons are justified. The decorated actress portrays Donelson with a brave exterior, although not someone entirely immune to public criticism. Beautifully shot with any detailed exterior and interior set pieces, a broad spectrum of the American landscape is covered, from the rugged outdoors to the high-society gathering within the nation’s booming capitals.

With the once dominate Twentieth Century Fox now inside Disney’s castle, the back-catalogue of classics may not get the exposure they once enjoyed. However, thanks to the efforts of Twilight Time Movies, who have released a number of titles from the studio this year, fans can rest assured that some of their old favourites now look and sound better than ever. The President’s Lady comes presented in 4:3 (1.33:1) under a rich and robust 1.0 DTS-HD Master Audio track, with English subtitles. Picture marries the look of its original film stock with a precise and carefully crafted HD upgrade, which never fails to impress. There’s nice texture to the image, particularly during outdoor sequences, which benefit from a high level of clarity. With a release of this quality and calibre, the decades-old biography-drama will live on for generations.

With the included English subtitles, you could easily make The President’s Lady an enjoyable silent film by switching on the isolated music track, a handy feature found on many Twilight Time releases. If you want to experience a slice of early 1950s pastime, listen to the abridged radio version of the classic featuring Charlton Heston, who reprises the role of Jackson and Joan Fontaine as Rachel Donelson. Despite the audio quality being a little poor, it’s worth checking out. For those unfamiliar with Jackson’s legacy, included with the release is a short booklet written by Mike Finnegan which contains three pages of in-depth background information on the president, his famed relationship, and the making of the film.

The President’s Lady is a charming story about how love can weather any storm and despite some of the film’s more dated aspects, it’s a pleasant viewing experience with the occasional brush of adventure and danger.