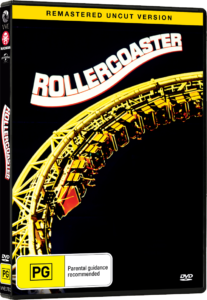 Coupled with disaster classic, Earthquake, the lesser-known Rollercoaster comes back to DVD, but this time uncut and remastered from Via Vision Entertainment. Boasting an ensemble cast of Hollywood’s finest, George Segal stars as an amusement park safety inspector who must track down a determined saboteur from targeting rollercoasters across America.

What was once a studio write-off after failing to make back its $9 million budget at the box office, Rollercoaster has since gained momentum thanks to subsequent TV airings, and various home video releases spanning VHS to Blu-ray. Chalk it down to lazy marketing, but the ‘disaster’ element is embellished instead of selling the film as the well-crafted thriller that serves as a template of sorts for the likes of Die Hard. George Segal as the protagonist, Harry Calder, navigates his day-to-day life with sarcasm and dry wit, whilst endeavouring to quit smoking. When he becomes the point-of-contact for the unnamed “mad” bomber played by an unassuming Timothy Bottoms, Harry must deal with the lapsed attitude of his boss, Simon (Henry Fonda), and the testy but no-nonsense FBI Agent Hoyt (Richard Widmark). We never learn the reason behind Bottoms’ vendetta towards the amusement park staple. Perhaps it’s resentment towards corporate American or trauma from a childhood incident as a result of negligence. Nevertheless, he carries himself in a way that’s unsettling. His boyish looks and calm demeanour allow him to blend seamlessly into the crowd. However, there’s something slightly off about him outside the obvious. Determining where our antagonist will strike next is the crux of the plot, during which he always seems multiple steps ahead of the authorities, adding to the ever-present level of danger among the countless oblivious patrons seeking the ultimate thrill. Shot on location at various amusement parks across the U.S., cinematography brings a lot in term of scale offering many point-of-view shots as we take the plunge. I can only imagine what Rollercoaster would have looked like if it were made today with a bag of GoPro cameras. Performances don’t falter with everyone making their presence known, despite some having only very limited screen time. Helen Hunt, who would have been fourteen at the time makes her film debut as Harry’s daughter, Tracy, while Susan Strasberg makes an appearance as girlfriend, Fran. Opposing stars George Segal and Timothy Bottoms play off each other well and are both instrumental regarding the film’s entertainment value, whereas veteran actors Henry Fonda and Richard Widmark bring an element of class to the production.

I own the previous DVD release of Rollercoaster by Universal from 2013, which has the same technical specs except for one significant difference and that’s video format. Via Vision’s NTSC disc is a noticeable improvement over its SD predecessor, with superior colour saturation and clarity, which remains consistent throughout the film. Presented in 2.35:1 widescreen and Dolby Digital 2.0 Mono, it’s an overall nice release for a film that has widely been overlooked for many years. Although, a more immersive audio track would have been better suited given the film’s thrilling nature, but the 2 channel output is perfectly adequate and dialogue is loud.

Complete with your standard trailer, the cornerstone of any disc-based release, the film is uncut at 158 minutes compared to the previous 153-minute Universal DVD. While it’s difficult to determine what makes up the additional five minutes, brief shots of more graphic imagery appear during the film’s opening and climactic scenes and there is extra dialogue between George Segal and Richard Widmark.

With spring finally here in Australia, pressing play on Rollercoaster may entice a trip to Lunar Park (depending on how your mind works), but nevertheless this underrated outdoorsy thriller is well worth your time and money.