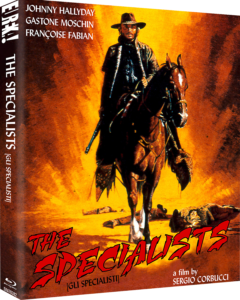 Spaghetti westerns were once a dime a dozen back in the day; the Italian off-spring of Hollywood westerns with a generous sprinkle of parmesan cheese. Eureka Entertainment have released Sergio Corbucci’s underrated classic, The Specialists (originally titled Gil Specialisti) on Blu-ray from a new 4K restoration complete with a Limited Edition O-Card slipcase and collector’s booklet.

Much like many of its contemporaries, the film’s plot revolves around vengeance and stolen loot, an event which is set into motion when Hud Dixon, a notorious gunfighter, rides into Blackstone searching for answers regarding the wrongful lynching of his brother who was accused of robbing a bank. The Specialists is in many ways a Sergio Leone clone, from style down to our leading man, who’s clearly a Clint Eastwood “knock-off”, but that’s not a slight against Corbucci and his star. We’re given a competently-made picture despite the familiarity and common tropes. Johnny Hallyday, a once-renowned French musician who is credited for having brought rock ’n’ roll to France, has tangible screen presence as Dixon. The multi-talent convincingly plays a solitary figure, skilfully navigating a plot involving corruption and injustice while encountering a variety of characters who could be either friend or foe. Filmed primarily in Italy, which stands in for the rugged American West, the mountainous landscape is beautifully shot and is easily one of the film’s most endearing qualities along with its colourful supporting cast. Gastone Moschin (The Godfather: Part II) plays the rather foolish Sherriff Gideon, alongside the seductive Françoise Fabian as Virginia. Meanwhile, Mario Adorf terrorises as the cartoonish one-armed Mexican bandit El Diablo. I wouldn’t say that there anything particularly remarkable about The Specialists; it simply replicates what has been done before, but nevertheless it’s still entertaining, easy to watch and a perfectly serviceable movie for fans of the genre.

Presented in 2.35:1 widescreen, the restored picture looks amazing with bright, vivid and naturalistic colours. The image clarity is exceptional on the other hand, is exceptional revealing a lot of details and nice textures. Sound is consistent across the board with English, French and Italian tracks all in 2.0 LPCM and while they’re very clear the sound effects are quite flat, which is common among Spaghetti westerns. Whoever decided that gunfire sounds the way it does has a strange ear for cinema. 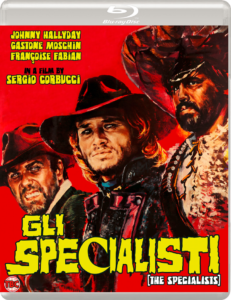 I watched The Specialists via the “rarely heard English dub track” which is more of a partial dub track. However, viewing the film this way isn’t confusing, surprisingly, considering how often it changes back and forth. Due to much of the original English recording being destroyed, there is a notable variance in quality, so for something more consistent, I would recommend the restored Italian and French audio options. Commentary and an interview with two notable film experts (respectfully) on the subject of spaghetti westerns provides an array of valuable information while further legitimising the film on top of this premium Blu-ray release that includes two very appropriate and authentic pieces of cover art.

The Specialists is a good introduction to the European brand of “Westerns” as it embodies everything that the genre is essentially known for and introduces audiences to a hero who is a fitting alternative to the likes of Eastwood and even Franco Nero despite being an imitation.