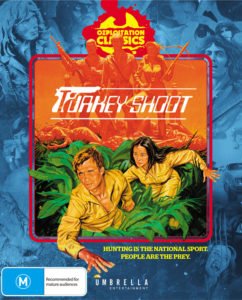 In the tradition of classics like The Most Dangerous Game, films in which people are hunted for sport and sadistic pleasure, Brian Trenchard-Smith takes the very mean spirited idea to the next level with his dystopian nightmare, Turkey Shoot, that’s out on Blu-ray under the revamped Ozploitation Classics sub-label from Umbrella Entertainment.

Set in the near future, which doesn’t look half bad from a 2021 point of view, a totalitarian state exists in which undesirables are sent to prison camps for re-education. In one such facility, Camp 47, a wrongfully accused woman, Chris, (Olivia Hussey) and a political warrior, Paul (Steve Railsback) is set loose in the jungle to be hunted by their depraved overlords but eventually gain the upper hand.

There’s nothing apologetic about Turkey Shoot. It’s insane right off the bat from the perverse sexualization of the female prisoners to the barbaric acts committed by our antagonists, epitomised by Roger Ward as Chief Guard Ritter, who is in large portion the films’ most recognisable character. Adding to the sheer level of lunacy is the addition of what is presumably a kind of genetically modified human abomination, an instrument of spectacular gore in many instances. I may be giving the film too much credit here, but I feel this science-fiction element draws inspiration from Nazi human experiments, particularly those carried out by SS physician Josef Mengele, the so-called “Angel of Death”. Mengele lived the remainder of his life in South America, a very similar environment to the film’s primary setting where he supposedly continued his horrific work. It’s an interesting notion and a deeply disturbing one at that, but in the case of Turkey Shoot the main focus is clearly giving fans what they want while imitating American Grindhouse cinema, and quite well too.

Known for being a troubled production and a hazardous work environment for its overseas cast members, Olivia Hussey especially, the sullied reputation this film has, only seems to add to its value as a gem of genre cinema from a bygone era and whether its your cup of tea or not, Turkey Shoot is fundamentally entertaining. I thoroughly enjoyed it.

It’s taken a surprisingly long time for Turkey Shoot to be released under Umbrella consider the high-quality of their DVD release from over a decade ago, but now the seminal Ozploitation classic is where it belongs. Presented in 2.85:1 widescreen, the image is very sharp, clean and vibrant, highlighting the tropic scenery of North Queensland where most of the film was shot. While it hasn’t undergone a 4K restoration like other classics of the Aussie sub-genre, it’s among the best put out by Umbrella in recent years. Dual audio tracks 2.0 & 5.1 DTS-HD MA both sound fantastic and help amplify the film’s chaotic and wild nature. If you have the means, definitely take advantage of the surround sound. English subtitles are included, and the disc is region-free encoded.

Turkey Shoot fans who missed out on previous releases can rejoice, as not only does this disc come with a new commentary from the film’s producer Antony Ginnane and Not Quite Hollywood director Mark Hartley, but ports over special features from the US Blu-ray and original Umbrella DVD. Buyers of the first 3000 copies are also treated to a separate soundtrack CD. The most recently filmed featurette, the Ozploitation Renaissance, offers a sit down with the film’s director Brian Trenchard Smith and producer Antony Ginnane, as well as fellow Aussie movie-maker Vincent Monton. The first 10 minutes of the interview explores the evolution of the Australian New Wave in the 1970s and 80s, from the perspective of the men who worked in different aspects of the industry while the final stretch specifically relates to Turkey Shoot. Boasting around two hours of interviews with additional cast and crew members from different points in time is an advantage of this set, as shown through the various viewpoints and opinions of the interviewees, all of which range from negative, supportive, and sometimes laugh-out-loud funny! Fans of the film will certainly find something new to appreciate whether it be Trenchard-Smith’s growing warmth of the film over the years, the star’s repeated wonderment as to how they ended up in such a messy production, or anecdotes of terrorising poor Olivia Hussey.  – by Hannah Lynch 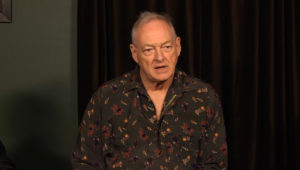 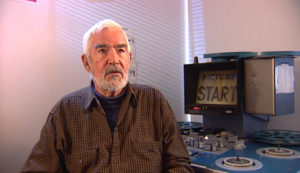 Turkey Shoot as a film may not be perfect, in fact quite offensive in parts, but as previously stated above, it really is a seminal Ozploitation title, a fact which is evident all over the release’s packaging, which utilizes various theatrical artwork and imagery. How it’s still rated M is beyond me, but Australian cinema has a long history of questionable ratings and classifications.