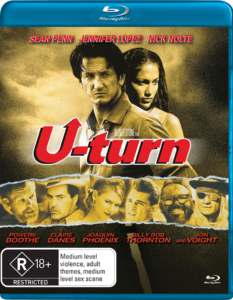 Cinema has always been my go-to means of escapism and during the middle of a four-day stint of painfully slow internet speeds, Oliver Stone’s U Turn was the perfect detour thanks to its recent arrival on DVD & Blu-ray from Shock Entertainment. Sean Penn heads up a stacked cast as slick drifter, Bobby Cooper, who’s on the road to pay off his gambling debt to Vegas gangsters when his car breaks down, leaving him stranded in Superior, Arizona.

Often when we get ourselves in a negative mindset, born of stress and frustration, something as innocuous as a cold Dr. Pepper can be an ordeal. Bobby enters the ironically named town with a similar attitude and barely an ounce of patience, but it soon becomes apparent that he’s stepped into a microcosm of sorts, an ‘island of misfit toys’ if you like. The seemingly lawless community is our hero’s biggest detriment, which trickles all the way down to a grease-covered Billy Bob Thornton as sole mechanic Darrell, who dictates “company policy” to serve his own interests. Nevertheless, the sight of the town temptress played by Jennifer Lopez sets the rather haywire plot into motion, involving sex, money and murder. Much like many traditional neo-noir films, the protagonist generally has a handle of things despite the lure of a ‘dame to kill for’. However, in Bobby’s case, we learn that his reckless behaviour has landed him in a world of trouble leading to what one could surmise as a self-induced purgatory within Superior’s aura of confined chaos. His only source of advice or wisdom comes from a blind war veteran played by an unrecognisable Jon Voight, who somehow appears immune to the environment. As mentioned above, U Turn does indeed boast a stacked cast with Nick Nolte as wealthy and equally psychotic business owner Jake McKenna, opposite the complacent Sheriff Potter played by the late Powers Boothe, who are the film’s most sinister characters. Last but certainly not least, however, are Claire Danes and Joaquin Phoenix as time-warp couple Jenny and the rebellious Toby N. Tucky, who serves more like a constant annoyance to Bobby whilst on his quest to escape.

High contrast, intense image clarity and an abundance of film grain give U Turn a razor-sharp edge while emphasising the harsh desert climate of Arizona. High definition enables these visual qualities to thrive and coexist perfectly. I can’t imagine the film looking any better on Blu-ray and I think any Ultra HD upgrade would prove to be a step backwards. Unlike many of Shock Entertainment’s previous releases we have the option of two audio tracks, Dolby 2.0 & 5.1 on a region B encoded disc. While they’re not instantly distinguishable, I’m sure fans of the film’s soundtrack will appreciate the immersive 5 channel output.

I feel that U Turn would have been better suited to Shock’s sub-label of Cinema Cult due to the film’s gritty style and nature, plus the well-earned R rating. It’s not Oliver Stone’s most cohesive film, but stands firm next to the likes of Natural Born Killer. So as Flo the waitress, played effortlessly by Julie Hagerty, politely told our weary hero, “Now you can fuckin’ take it, or you can fuckin’ leave it.”