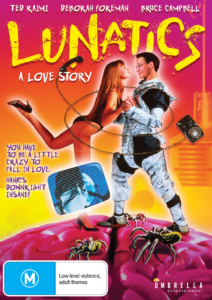 As many collectors and film fans bask in this 4K climate, the phrase “…first time on DVD.” probably sounds almost foreign to most. However, it’s very much the case for Lunatics: A Love Story, which recently made its surprise debut to the SD format under Umbrella Entertainment in Australia.

Hank Stone (Theodore “Ted” Raimi) hasn’t left his seedy L.A. apartment in six months. He spends most of his time writing mediocre poetry between frequents bouts of crippling paranoid delusions about sadistic surgeons, deadly spiders and freestyle rappers. Upon sheer luck, Hank crosses phone lines with a recently dumped and penniless woman who he invites back to his place, where the two strike a connection via their personal eccentricities.

Produced by Sam Raimi, Bruce Campbell and Rob Tapert under their studio Renaissance Pictures, Lunatics: A Love Story is an oddity that could have only been made the by The Evil Dead entourage. Set to a theme of cool jazz, the film’s neo-noir edge paints a wildly kooky portrait of L.A street life which feels like a world within itself. The environment’s worst qualities are amplified ten-fold within Hank’s problematic and fragile mind by terrifying hallucinations that creatively illustrate his and irrational fears of the outside world. I think anyone who has experience with social anxiety will likely find some common ground from our isolated protagonist’s behaviour. Deborah Foreman (My Bloody Valentine) is perfectly aloof as the disoriented Nancy, whose own struggles with the outside world combined with her belief of being a jinx, ring true to those who feel out of sync or have a general weariness of people. On a more visual front, stop motion special effects are on full display in bringing the eight-legged freaks that prey of Hank’s fears to life. Despite the method being a little dated by 1991, it suits the film perfectly and reflects the quirky sentiments; any digital elements would have been horribly out-of-place. Ted Raimi, who was far from an established name at the time, is a glove-like-fit for the role of Hank. To put it simply, he just has the face for it and portrays as man tittering on the edge of sanity with much ease.

A delusional and paranoid poet hallucinates and almost becomes a serial killer, but saves a beautiful girl from street-gang members and becomes a hero. – Inaccurate IMDb description

Unfortunately, quality does not reach the pinnacle of what DVD is capable of, but it’s a vast improvement over the bootleg copy that has previously made the rounds online. Presented in standard 4:3 letterbox, which may be a point of contention for some, it’s not something I had an issue with and in a way adds to the title’s level of obscurity. Encoded for region 4 players only, Lunatics is an ample opportunity for fans to invest in a multi-region machine, which are far from expensive these days. Given the ‘event’ status of this particular title, I would have liked to have seen Umbrella at least offer a menu screen of some variety, especially since the film offers a lot to work with creatively. Nevertheless, I tip my hat to the label for giving this 90s cinematic relic a new lease on life. 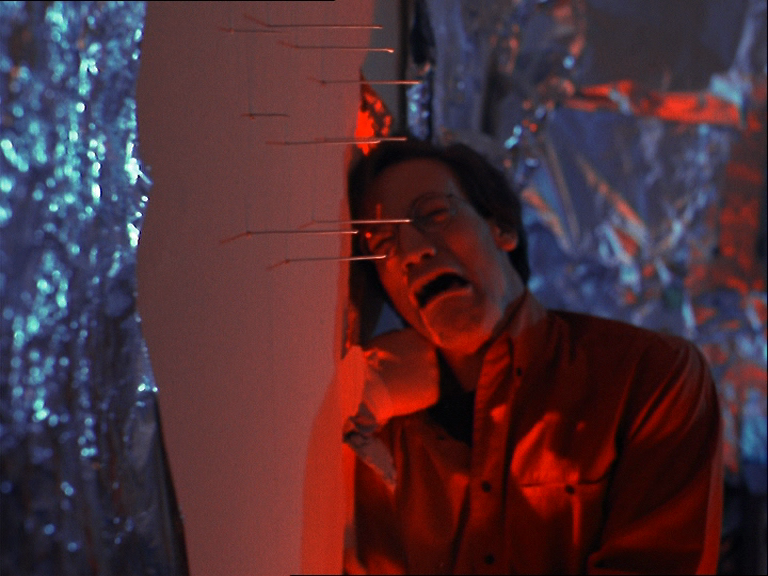 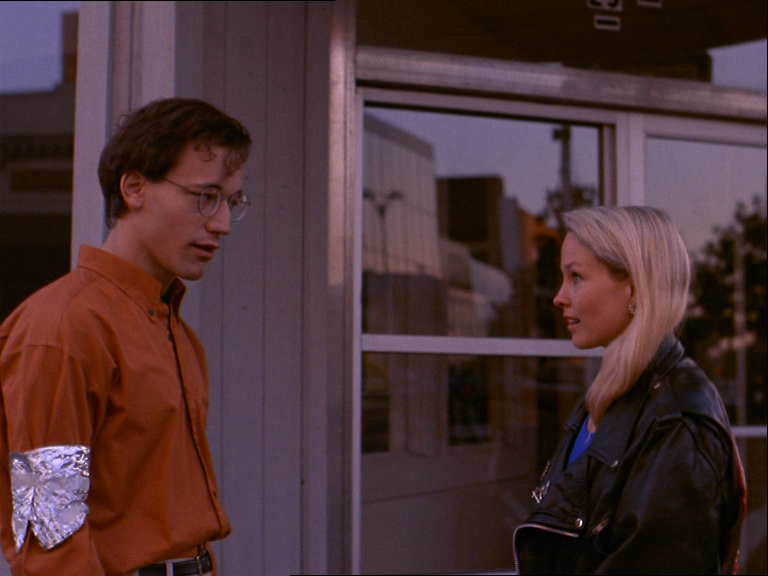 Watching Lunatics: A Love Story for the first time felt special and nostalgic, despite having never seen or heard of it before. With all the lunacy and random elements, it’s a comedy-romance geared towards outsiders and worthy of more attention. I’m confident this DVD release will serve the film well and possibly pave the road for future editions.