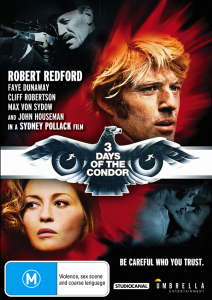 Throughout their respective careers, director Sydney Pollack and screen icon Robert Redford collaborated on six distinguishable films between 1966 and 1990, spanning cinemas most loved genres. Without a doubt their most gripping venture is the highly secretive and deadly thriller Three Days of the Condor, which has just found it way on DVD shelves via Umbrella Entertainment’s January line-up.  Made during a time when government distrust was rife within the public conscious, we enter the confined and unassuming world of a bookish CIA researcher by the name of Joseph Turner (Redford), who upon returning from lunch finds his co-workers brutally slain. With a target on his back, Turner must outwit those responsible until he can find someone he can trust.

Much like our protagonist motivation, it’s the desperate need to know what’s actually going on that keeps the viewer invested, heightened by the savagery of unknown villains and a convoluted plot derived from cryptic conversations and code names. Redford’s performances as the vulnerable Turner is thoroughly convincing; a minor and unbeknownst piece in the complex machinery of unlawful agenda at the highest levels. In constant pursuit is a meticulous freelance assassin played by Max von Sydow, who brings a constant sense of unease through an otherwise pleasant demeanour.

Where do lies end before the truth begins? Three Days of the Condor won’t answer that question, but it will give you plenty to think about regarding what’s behind all locked those of government establishment.