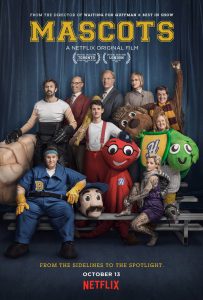 I’ve loved the mockumentaries of Christopher Guest ever since I caught A Mighty Wind on Foxtel over ten years ago; although I’ve always found it difficult to describe his distinctive brand of comedy. Having given it some serious thought in preparation for this review, I would describe Guest’s style as affectionately satirical mixed with traits of off-the-wall humour. No matter the subject of his films the veteran director and actor is able to poke fun while encapsulating its best qualities, often through a widely diverse cast of eccentric characters. His latest project Mascots is no exception, which follows several sporting mascots who are actively competing for the World Mascot Association Championship’s Gold Fluffy Award.

Premiering exclusively on Netflix back in mid-October, the reception has been mixed from long-time fans and new audiences alike. I however was pleasantly surprised considering it’s been an entire decade between films. It’s a fair assumption that most of us give very little thought to the individuals who tirelessly represent our favourite sporting team, known only from their flamboyant outfits. Mascots gives viewers an intimate glimpse as to what makes these fictional characters’ tick, whether it be family tradition, self-expression or aggressive competitiveness. Archetypes are on point and apart from being consistency funny throughout, underlying subtext gives the film a more poignant quality stirring up a range of emotions. The ensemble cast of actors, many of whom regular to Guest’s other films of the genre all give terrific performances. Parker Posey is quirky as the nature-oriented Christian, Cindi Babineaux, while funny man Fred Willard is hilariously ignorant as a mascot manager. Among the new faces to the troupe, Chris O’Dowd stands out as the brash Tommy ‘Zook’ Zucarello, who appropriately dresses as a fist for his respective ice hockey team.

For me Mascots felt like a reunion with old friends; it was both familiar and refreshing. Christopher Guest hasn’t lost his touch as a film-maker and I hope he still has a few more of these up his sleeve.