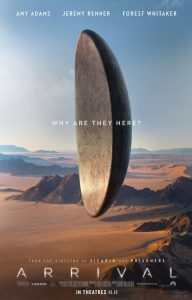 Unlike some film genres my love for science fiction has yet to diminish over time; if anything I’ve gained a greater appreciation since exploring many vintage titles from its golden era. When the trailer for Arrival dropped online it instantly pique my curiosity along with countless others. In this very sombre piece from hard-edge director Denis Villeneuve, a linguist is recruited by the military to assist in translating alien communications from one of a number of unknown object that have appeared in various locations around the globe.

During the first half of Arrival we’re presented with many of the fundamental elements synonymous with classic sci-fi cinema, raising commonly asked questions, one of which appearing prominently on the film’s poster. Initial events unfold in a way that we could possibly expect if such an event were to actually occur, which coincides well with the film’s realistic approach and tone. While I was thoroughly intrigued by the profound sense of mystery, dissatisfaction became to creep in as the focus shifted from the aliens to the protagonist. A philosophical tone pertaining to personal struggle and torment took over, which I felt eclipsed much of what was being offered earlier on. Despite my misgivings Amy Adams is extraordinary poignant as the film’s lead Dr. Louise Banks; accompanied by Jeremy Renner who is a solid counterbalance as theoretical physicist, Ian.

In many respects Arrival is an impressive and well-made film, earning big points for originality and performances from a modest cast of immensely talented actors. Contrary to what the majority of people are saying it may not click with everyone, but you’re in for an experience nonetheless.