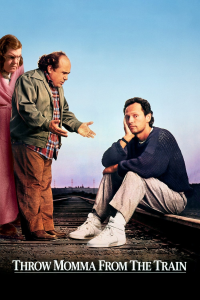 Criminal matriarch Mama Fratelli from The Goonies will forever be my favourite ‘screen mum’, due entirely to the un-apologetically abrasive performance of actress Anne Ramsey; but it’s her Oscar-nominated turn as the titular character in Throw Momma from the Train that deserves more love, especially on this Mother’s Day.

Putting a darkly comedic spin on a Hitchcock classic, struggling writer Larry (Billy Crystal), consumed by resentment towards his ex-wife, and middle-aged momma’s boy, Owen (Danny DeVito), both want their respective former spouse and mother dead; inadvertently initiating a plot in which to do so. Making his directorial debut, Danny DeVito crafts a clever and consistently funny crime laden comedy with characters and situations that are relatable to the viewer. As someone who has struggled with writing in the past, admittedly racking up many hours in front of a blank Word document, I emphasize strongly with Larry, even more with the negativity he harbours over being wronged. Owen’s mother, while not an outright antagonist is the crux of our story about two men who are simply stuck, victims of their own circumstances. Billy Crystal and Danny DeVito play their roles to a tee, mixing unrestrained anguish and sharp sarcastic humour with childlike innocence and naivety.

Less than a year following the release of Throw Momma from the Train, Anne Ramsey sadly passed away after a brief battle with cancer, but not before adding another six screening credits to her name. Her performance may border on cartoonish, but it feels genuine and I imagine hits close to home for a lot of people. For a film that explores those dark thoughts that linger in the back of our minds, it’s highly entertaining in addition to being a smart little homage to the sinister side of classic cinema.