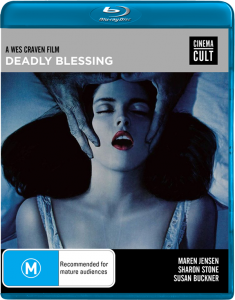 etween the raw unrelenting nature of The Hills Have Eyes and the huge commercial success from A Nightmare on Elm Street, director Wes Craven was in a transitional phase with Deadly Blessing, a rural slasher in which a widow grows paranoid over a neighbouring god-fearing community, who see her as an unholy intruder on their land. Flirting with the supernatural, Craven keeps things ambiguous as to what diabolical forces are at play while ramping up the scares for viewers with a number of skin-crawling scenes, one in particular appearing very familiar to seasoned horror fans. Despite earning a Razzie nomination for Best Supporting Actor, Oscar-winner Ernest Borgnine is intimidating as the antagonistic community leader Isaiah, a driving force behind the film’s ominous tone and instrument of fear to our lead Martha, played by Maren Jensen. As our protagonist, Martha is a strong-willed woman, whereas her two visiting best friends, Vicky (Susan Buckner) and Lana, played by a young notably inexperienced Sharon Stone, are more of a means to an ends.

Available now on Blu-ray from Cinema Cult, this obscure classic is unfortunately a bare-bones release, but don’t let the lack of bonus content sway you as it’s reasonably priced and does offer premium quality in both picture and sound, complete with English subtitles.

Deadly Blessing is often unfairly criticized and while it’s compromised to a degree by studio interference, I think it holds up well and functions as any horror movie should.

Note: Cinema Cult have also released this film on DVD.