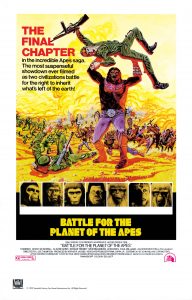 Caesar’s impassioned proclamation, which concluded the previous film put mankind firmly on notice and I couldn’t have been more excited to see how the final chapter, Battle for the Planet of the Apes was going to end the story, so I pressed play for the last time. Opening early into the 21st century, nuclear war destroyed civilisation. Outside the desolate ruins, Caesar, now the prominent leader of an established village tries to cultivate peace between the ruling apes and surviving humans, but warring factions on both sides are opposed and threaten the already fragile coexistence.

For several years I would have said without hesitation that this fourth sequel was my least favourite, but after numerous viewing I’ve developed some fondness despite with what is a mostly rushed film. The instability of a new regime is shown realistically, along with the distrust and opposition that usually comes with it. Characters within the film represent these themes well, such as General Aldo, an aggressive and prejudice military leader who is of the mindset that only one species can rule supreme. Whereas, Caesar, who strives for a world in which both can live together without conflict does show traces of insecurity. Rather than fleshing out these sentiments properly, a black and white approach is opted for in favour for action and spectacle, which unfortunately reveals the production’s lack of resources and low budget. Never have I seen the same explosion used so often in such a short amount of time.

Ending on an ambiguous note regarding the uncertain future of man and ape, Battle for the Planet of the Apes is a bittersweet end to a series of films that spanned five years, capturing imaginations the world over and until somewhat recently, allowing us to wonder when we’ll all return to the Planet of the Apes.