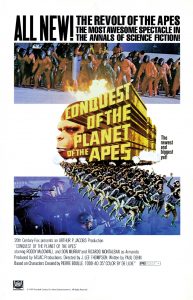 After some much needed sleep from a night of going ape, my mission during the daylight hours of New Year’s Day, 2000 was to watch the last two chapters of Planet of the Apes. I walked with my best friend Michael to our local video shop, among streets that were eerily quiet, except for one disoriented man who berated us for not giving him cigarettes after kindly telling him that neither of us smoked. Sometime later that afternoon I began my second double-feature with Conquest of the Planet of the Apes, which takes us into the not so distant future where the human society has embraced ape slavery after a mysterious plague brought back from outer space wiped out all cats and dogs. Milo, the unexpected off-spring of Zira and Cornelius arrives in an unnamed North American city (presumably Los Angeles) with his carer Armando to advertise their circus. Witnessing the cruel treatment of apes by their human masters, the seeds of revolt and revolution are planted.

Overall I think Conquest of the Planet of the Apes is a strong sequel. It’s a fitting catalyst for the inevitable take-over of mankind and a pretty stark reflection of the time during which the film was made, tacking the subject of racism head on. However, I’ve always found it somewhat of a struggle to sit through despite a runtime of only 88 minutes. There’s a low-end quality to the production and the plot feels rushed, with a number of key scenes not given the screen time they clearly warranted. I feel this results in a lack of engagement with the audience, not allowing the proper emotions to build as they should for the film’s climax. Furthermore, certain elements are given little to no explanation, like the sudden evolution of earth’s apes. I realise that a lot of I’ve just above can be attributed to the fast turn-around between instalments, clearly driven by studio heads, but it’s disappointing nonetheless. Roddy McDowall excels as Milo, our new hero who is unceremoniously christened with the appropriate name of Caesar. His actions culminate in a violent uprising against humanity, allowing audiences to cheer for the villains that man has now become.