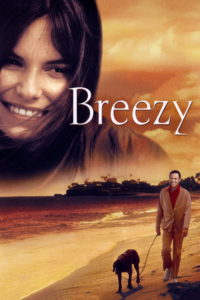 This past Valentine’s my girlfriend and I thought we had all the bases covered. We exchanged gifts, spent some quality time together and enjoyed a nice dinner; but we hadn’t settled on a suitable movie to cap off the evening, so the rush was on to make a last minute selection while the night was still young. We promptly agreed on Breezy, a romantic drama about a free spirited teen-aged hippy and a middle-aged divorcee whose paths cross one morning. Despite contrasting personalities and an obvious difference in age, the two unexpectedly fall in love.

I find there’s often a constant feeling of apprehension with film’s that revolve around controversial relationships, as is very much the case here. However, insightful dialogue between the two leads are a welcome distraction as they begin to understand each other, leaving behind any misconceptions they may have had regarding their generational divide. Devoid of any superficiality what we see develop over the course of the film is beautiful and completely genuine, contrary to the initial public perception by those close to the older gentleman, who does struggle with this social factor despite his true feelings. Directed by Clint Eastwood, Breezy reveals a tender side to the often tough exterior we’ve come to know so well on screen. He handles writer Jo Helms’s material with great care, placing an emphasis on realism, which often results in moments of sadness, anguish and of course joy. Although in a different capacity, Eastwood will go on to explore similar themes over thirty years later in his poignant drama Million Dollar Baby. In which he depicts a relationship between an elderly boxing trainer and his aspiring female fighter, played by Hilary Swank. Only nineteen-years-old at the time, actress Kay Lenz performs wonderfully in the role of Breezy, affectionately serving as the film’s title. Her cheerful personality and optimism brightens her many scenes. Playing opposite is William Holden as Frank, who is equally impressive as a lone bachelor weighed down by modern day cynicism; only to be rejuvenated by Breezy’s energy, love and spontaneity. It’s a brave role for the highly dignified ageing star.

Unfortunately removed a short time ago, Breezy was one of the many classic titles available on Netflix. Should it return to the popular streaming service, I highly recommend adding it to your queue.