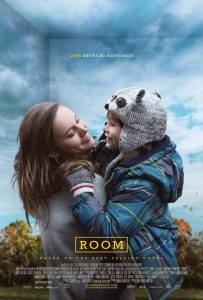 I knew going in that Room wasn’t going to be an easy film to watch, despite only knowing the basics surrounding the story. However the driving force for me to see it, was my love for human dramas and the trivial reason to get another Best Picture nominee watched before the Oscars later this month, bringing my total to six out of eight. Adapted from the novel of the same name by author Emma Donoghue, Room is an Canadian-Irish production centred on a young mother and her 5-year-old son, held captive for several years in an enclosed space. After a desperate escape, the boy, Jack is finally able to experience the outside world free from the confines of his former surroundings, while the his mother struggles in coming to terms with the freedom she has longed for her and her child.

During the first 30 minutes, doubt quickly entered my mind as to whether or not I’ll be able to finish watching this film. It’s no an exaggeration when I say that Room is extremely distressing; confronting the viewer with the absolute worst of human cruelty and depravity. Although thankfully, the lingering despair throughout the scenes of forceful confinement are off-set well by the touching relationship between mother and child. Their bond is unbreakably strong, not to mention the efforts made towards maintaining a sense of normality despite the appalling conditions. The biggest surprise for me and probably the main reason why the film has been so well received is the break from convention in regards to subsequent legal proceedings following the escape. Instead of transitioning into a courtroom drama hybrid, the focus remains solely on the two leads. While on the same journey into society the contrast between the distinct characters is handled brilliantly, elevating the film to an unprecedented level of emotional impact. Performances excel during this crucial part of the story, with Jacob Tremblay who is strikingly realistic as Jack; initially frightened by the enormity of his new world, but soon learning to connect with others and embrace his new and exciting life. Brie Larson as the mother, physically exudes the heavy burden of a stolen youth and unlawful imprisonment; while relieved at finally being free she quickly becomes disillusioned, harbouring resentment towards the world she was once firmly apart of. You could call it an Oscar-bait role, but you would not only be degrading the film, but the young actress herself, who very much deserves the prized golden statue.

Room is now showing in theatres across Australia and despite the limited release in Victoria thanks to the questionable logic of Village Cinemas, I’m glad I made the extra effort to see it.