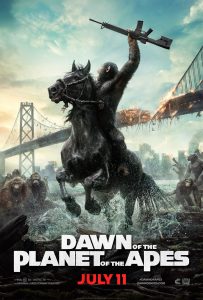 I’m of the opinion that nothing is too good when it comes to Planet of the Apes, so the luxury of Village Gold Class inside Melbourne’s famous Jam Factory was the venue of choice for my girlfriend and I to watch Dawn of the Planet of the Apes. Set ten years after the events of the previous film, humanity has been decimated by a deadly virus known as ‘Simian Flu’, a by-product of the drug that gave apes their remarkable intelligence. Caesar has established a colony of apes in the Muir Woods outside of San Francisco, where a band of human survivors are attempting to start over.

Much like War for the Planet of the Apes we have a volatile coexistence between man and ape, creating a constant tension and feeling of unease that’s palpable to the viewer. Caesar’s growth as both a character and leader demonstrates logic and restrain from the film’s writers. While clearly changed in many respects, audiences are still able to sympathise with our hero despite his wariness toward humans. The aggressive factions on both sides who desire only one dominate species over their planet, reiterates the constant struggles of peace and equality that not only mirrors  modern society, but has made Planet of the Apes and I quote, “the grand tragedy of science fiction”, eloquently put by fan Douglas Nary Jr. Changing up the human characters from the first film adds a new dynamic to the story, while their minor ape counterparts such as the wise orangutan Maurice and the savage baboon Koba, feature more prominently this time round. Notable performances come from Australia’s own Jason Clarke as the goodwill baring Malcolm and of course Andy Serkis who excels once again as Caesar, exuding great presence.

Sporting an immense production of details sets and a colour pallet that perfectly captures the dreary mood of a broken world, Dawn of the Planet of the Apes is dramatic action-adventure where good intentions and marred by the bad.