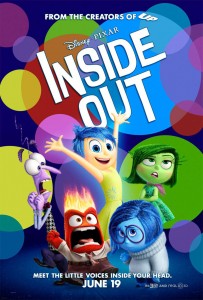 ms as much as the next person, but I just haven’t seen many of them. The last one I saw in theatres was ‘The Incredibles’, which I can’t believe is over ten years old already. As 2015 marks Pixar’s twentieth year and ‘Inside Out’ being their fifteenth animated feature, it was as good a time as any to experience their unique blend of movie magic in the comfort of a local theatre. When 11 year old Riley is uprooted from her home in the Midwest and moved to San Francisco where her father is embarking on a new business venture; her emotions which are characterised as Joy, Fear, Disgust and Sadness, all conflict as to how best navigator Riley through this sudden and daunting change in her life.

This isn’t the easiest film to describe, so talking the advise of my girlfriend I’m going to talk more about how ‘Inside Out’ it made me feel. First I was very impressed above all else by the film’s idea, which is nothing short of genius and it’s execution could not have been better. The inner workings of person’s mind is represented in a simplistic manner yet it still embodies it’s sheer complexity in terms of memories; how they’re stored and their affect on our emotions and behaviours. What I saw was similar to how I use to imagine my mind when I was a child. I think for anyone who has experiences periods of depression or even the anxieties that come with sudden life changes will find ‘Inside Out’ particularly meaningful, as I did. There are sad moments throughout the film but it’s the type of sadness that is followed by a sense of relief and the realisation that things will be okay. Visual design is highly imaginative and utterly spectacular; featuring an array of vibrant colours which are effective in symbolising the varying emotional characters. Voice acting is equally impressive, featuring a cast of renowned comedic actors, most notably Amy Poehler in the lead role as “Joy”. Although I really liked Bill Hader as “Fear” who brought much of the comedic relief.

I’m sure most will agree that ‘Inside Out’ will finish right up there with the best of 2015; I’m calling it for ‘Best Animated Feature’ come Oscar time. I adored this movie and I cried on more than one occasion. Go see it with someone you love.