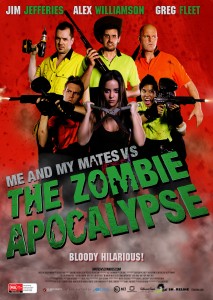 Audience participation was in full swing at last night’s Morwell screening of ‘Me and My Mates vs. The Zombie Apocalypse’, which is a crown-funded cinematic venture that is now screening in selected theatres across the country thanks to the unique cinema on demand service, Tugg. There’s definitely no shortage of zombie movies these days as the un-dead are as popular as ever with film audiences, however very few of them are Australian. Thankfully director Declan Shrubb has cleverly merged the gore-rich genre with our undeniably colourful humour and culture, resulting in 90 minutes of pure hilarity. We follow three telecom tradesmen who have fortified themselves inside the local telephone exchange during the initial stages of a zombie apocalypse. Despite the horrendous carnage that is quickly escalating outside, the three mostly seem un-phased.

Right off the bat, it’s very clear what one can expect from this splatter-fest. It follows a very generic and typical plot as far as zombie movies go, but it’s the characters that give this film life (no pun intended). The often obscene dialogue certainly pulls no punches and is the film’s overall driving force, which in a way has allowed the filmmakers to celebrate our bogan culture, which is often reviled and subject to constant ridicule. It’s harshness and the graphic nature of zombies themselves are a surprisingly perfect fit. There’s a natural emphasis on blood and gore, the effects of which are very impressive given the film’s modest budget. Fans will definitely not be left feeling cheated. I must add that with the amount of absurdity that’s on display there remains an element of realism. While many of the conversations shared amongst the characters are frivolous, their logic for the most part is quite sound given the dire circumstances. The biggest name in this picture is undoubtedly comedian Jim Jefferies who never fails to entertain, but much of the credit to the film’s success must be given to YouTube celebrity Alex Williamson and Greg Fleet. Their on-screen banter is priceless.

My experience seeing ‘Me and My Mates vs. The Zombie Apocalypse’ on the big screen is one I’m not likely to forget any-time soon. The impressive turn-out by locals was matched by their enthusiasm in support of independent cinema. Genre fans rejoice! There’s a lot of fun to be had with this one.