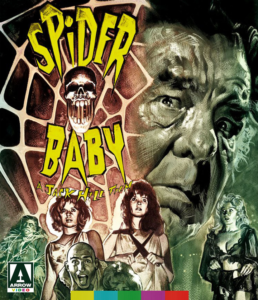 While watching a very informative documentary on Lon Chaney Jr. several years ago, there was brief mention of a little low budget feature he appeared in called Spider Baby or, The Maddest Story Ever Told, during the later years of his life. Something about it resonated with me so I made a mental note to one day seek it out. Unexpectedly earlier this month I was able to sit down with my girlfriend and watch the obscure piece on Blu-ray thanks to a friend and avid horror movie collector, who has quite the refined taste. Not to go into too much detail, Spider Baby is the third feature from Roger Corman’s protégée and B-movie king Jack Hill, and tells the “maddest” story of family caretaker Bruno (Chaney) who has devoted his life to three wayward siblings after their father’s passing.

Despite the macabre nature of the film’s narrative and of course, a few of its characters, I view Spider Baby as a story of unconditional love. Our central figure, Bruno is a deeply compassionate man, caring for and protecting his deranged brood despite the danger they present; especially the wild and playful Virginia, who’s madness and curiosity is rarely deterred. There’s a darkly comedic element which stems from the arrival of distant relatives and two legal representatives. Their reactions to this mentally afflicted family range from disturbed to initial friendliness and acceptance from the sibling’s cousin, Peter. I can’t image Spider Baby being anything other than black and white, it looks fantastic! There’s so much atmosphere and the camera works really embodies that classic “creepy-old-house” feeling, while at the same time is reflective of how our young characters behave and move about their decrepit surroundings. Lon Chaney Jr. delivers the performance of his life, all in one highly emotional monologue, parts of which I think he draws from his own personal hardships and inner demons.

For anyone who has ever felt different or out of step with the world in general, Spider Baby will likely strike a chord, in addition to providing a unique horror experience, transcendent of the time period. If you can, get your hands on a copy of Arrow Video’s Blu-ray release, it’s worth every cent!