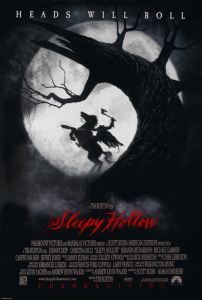 Fitting in nicely with the film’s optimistic ending in which our trio of heroes arrive to a new century, Sleepy Hollow ushered Australian movie-goers into the new millennium, opening in cinemas on New Year’s Day. I was on school holidays during a particularly hot summer and I went to see Tim Burton’s gothic mystery with my mother and while I enjoyed the blood splatter and head lopping, I remember finding the plot a little convoluted during the film’s final acts, leaving me with some disappointment. Maturity and time and have thankfully change my opinion of the Sleepy Hollow, which has now become a favourite among the many horror movies my girlfriend and I indulge in every October.

Loosely inspired by the 1820 short story “The Legend of Sleepy Hollow” by Washington Irving, we follow unorthodox police constable Ichabod Crane (Johnny Depp) of New York City, who is tasked with investigating a string of grisly decapitations in the up state village of Sleepy Hollow, where legendary aspiration the Headless Horseman rides. I can’t think of another film that visually represents that classic idea of a traditional horror movie; the stuff of bedtimes stories, from shadows on the wall by way of candle light to a scary old house atop a lonely hill surrounded my ominous fields of corn. Science and superstition clash in a darkly humorous fashion as our protagonist’s logical mind is tested by those he meets the instrument of evil, symbolic of the scandal and injustice that stems from the town’s unsavoury elders. Depp’s characterisation of Ichabod Crane is among one his finest under Tim Burton’s direction; a likable outsider whose nuances bring unique a presence to the God-fearing community and are juxtaposed by the free spirited Katrina, Crane’s love interest, played by Christian Ricci.

Blanketed in shades of blue and grey, the vivid glow of jack o’lanterns that can be often spotted throughout this gorgeously shot feature epitomised the Halloween festivities and joy of watch horror movies during the year’s spookiest night. While it’s not the most popular titles in Burton’s filmography, Sleepy Hollow is definitely underrated!