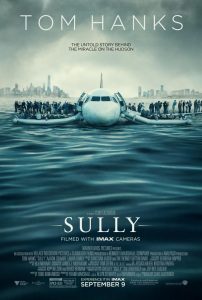 s no secret that Clint Eastwood has great love and admiration for American heroes. Despite the controversy that can sometimes be attached to such individuals, Eastwood has a knack for putting things in perspective, reminding audiences of the overall positive impact that came from their selfless acts. We don’t commonly think of airline pilots as heroes, regardless of the fact that millions of lives are placed in their hands daily. Maybe it’s the assured safely that we take for granted which prevents us from thinking otherwise. One such man of the sky is honoured in the newly released biographical drama Sully, detailing the events of January 15, 2009 in which veteran pilots Captain Chesley “Sully” Sullenberger and First Officer Jeffery Skiles successfully land US Airways Flight 1549 onto the Hudson River after a bird strike disables both engines shortly after take-off.

There’s a grey cloud that hangs over this film, both literally and emotionally. One can feel it through the trauma Sullenberger is left to deal with, which begins mere hours after the miraculous event. Disturbing nightmares and sombre moments of day dreaming reflect Sullenberger’s pain and self-doubt despite having saved all 155 souls on board the ill-fated flight. While the event’s subsequent inquiry by the National Board of Transport Safety steers the narrative, an almost fragmented account of what took place in the cockpit and on the river proves to be an effective technique, realistically showing how such an event would be reconstructed in one’s mind.  Filmed almost entirely with IMAX cameras, few other films have managed to capture the staggering size of New York City. Certain perspective shots from nearby on-lookers present an obvious parallel to 9/11, which not only evokes an unsettling feeling within the viewer, but subtly reveals the lingering fear of another attack felt by countless residents of the “City That Never Sleeps.” As viewers may assume, Tom Hanks is outstanding as Chesley Sullenberger in a performance that shows how a courageous act can have its price and that stepping back in to normality is anything but easy. Aaron Eckhart delivers a humble performance as Jeffery Skiles, and is a noted presence even next to Hanks’ stature as a leading man.

At age 86 Clint Eastwood certainly hasn’t lost his touch as a director. While the tone was a little too sombre for my taste I appreciated the non-glamorized approach in telling this very human story about courage and the fight for vindication. You can catch Sully currently playing in cinema across Australia.