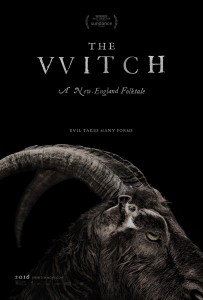 Due to a frustratingly limited release here in Australia, my fear of having to endure the agonizing wait to see The Witch on home media was thankfully never realized. I was lucky enough to win a double pass to see it excursively at Melbourne’s very own Cinema Nova this past Thursday night, thanks to an online promotion through Monster Pictures. Set in the early 17th century, a Puritan family are terrorized by an evil force dwelling in the large forest beyond their New England farm. Fear and superstition develop into paranoia as occurrences intensify, tearing the family apart.

With it’s basis firmly set in the annuals of American folklore, first-time director Robert Eggers utilizes striking and often disturbing imagery as symbolic reference to perceived incarnations of evil, the on-set of womanhood and stitch religious doctrine; while mostly subtle this ambitious piece quickly gets under your skin. Many folktales tell of temptation’s lure in times of great strife, with witches and even the Devil himself often taking the form of seemingly innocent individuals or animals to entice the desperate and morally corrupt; implications to this are made towards certain characters who feel are most burdened with responsibility in face the of such dire circumstances.  There’s an underlying sense of melancholia throughout the film, lingering beneath like an untreatable sickness, the unseen presence looms over the modest homestead as if it were hiding among the thick morning fog. Bland natural colours are fitting to the film’s dreary tone, reinforcing the increasing sense of despair with only candle light providing limited warmth and a feeling of momentary safety. The limited cast is a refreshing sight from Hollywood’s A-list, all of whom delivery emotionally intense performances. Newcomer Anya Taylor-Joy as the eldest child, Thomasin, is excellent in the film’s central role, a young woman who bears the brunt of not the unforeseen darkness, but accusations and animosity from her family.

Serving as more a tradition slow-burner as opposed to a more convention horror story, The Witch may not be what you expect. Filled with subtext and commentary on the social climate of pre-revolutionary American, graphic content is limited, but it’s the subtext and interpretive nature which proof to have the greatest affect on it’s audience.