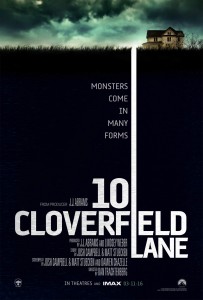 Shrouded in mystery prior to it’s release and continuing right up to the film’s climax, hardly anyone knew what to expect from 10 Cloverfield Lane. All we had was a couple of ambiguous trailers and the cryptic clue that lay within it’s title, which only seemed to generate confusion among anxious film goers. Sitting behind me in a practically empty 250 seat cinema, a women asked my girlfriend and I if this was a sequel to 2008’s Cloverfield; a question not sufficiently answered with a simple yes or no. To be vague for your benefit, after a sudden car accident a women awakens to find herself chained to the wall of an empty room only to be told by her alleged captor that there has been an attack on the world above, rendering the air toxic.

Some may find the fact that you don’t know what’s going on more frustrating than intriguing, whereas I thrived on the idea. Much of the enjoyment that comes from watching 10 Cloverfield Lane is putting pieces together yourself, as suggested through a subtle jigsaw puzzle motif throughout the picture. Tension is effectively maintained through the clever utilization of acoustics which not only resonate the simple closing of doors to startling levels, but the unknown ominous sounds heard outside. Further more the limited cast convey a fragile existence as the result of their growing paranoia and skepticism; which is attributed to strong naturalistic performances, most notably from Mary Elizabeth Winstead in the leading role and John Goodman who is remarkably unsettling as an earnest host.

Despite it’s simplicity 10 Cloverfield Lane is intelligent filmmaking. It’s Twilight Zone-esque narrative serves as mental exercise in human behavior, deduction and logic. I don’t think it’s for everyone, but I implore you to give it a chance.