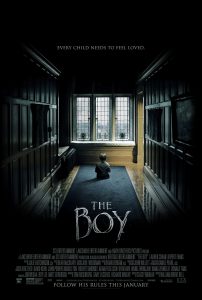 Horror fans can be a fickle bunch at times; praising originality in one breath then criticizing it in another.  Provoking such a reaction is The Boy, which opens today in selected cinemas across Australia. The eerie tale follows Greta, a young American woman who accepts a position as a nanny for an elderly couple living in the English countryside. Upon arrival at their looming mansion, our protagonist is shocked to discover that the pair’s son is in fact a child-size porcelain doll, who is relentlessly doted on by her new employers. Left with only the faux boy, uncannily named Brahms, and a strict set of rules for taking care of him, things begin to go horribly wrong for Greta when she begins to defer from her dependent’s “wishes”.

While the opening of this psychological tale doesn’t treat the viewer to unfamiliar horizons, the cold atmosphere throughout is noticeably effective despite the clichéd setting for this Gothic genre piece. Somehow, the lingering solidarity that often accompanies one left alone in a large house, haunts the viewer as well as our lead, while ghostly whispers and sounds play on our psyche. This pronounced atmosphere brings originality to the film’s fairly typical formula, as it constantly begs its audience to question the protagonist’s surroundings, thus keeping them engaged throughout. Known famously for her role in television’s The Walking Dead, actress Lauren Cohan gives a convincing performance as Greta, displaying signs of emotional scaring from a recent traumatic past, inhibited further by her bizarre situation. Serving as a nice counterweight to the mounting tension is Rupert Evens as the residence grocery boy Malcolm, who is a welcoming presence providing exploratory dialogue.

No to be hindered by the onslaught of negative reviews, I was pleasantly surprised by what The Boy was able to achieve. Visually reminiscent to an old Hammer production, although not a very scary movie on the surface, which may attract those who don’t frequent horror films or prefer thought-provoking thrillers; it very much delivers by catering to our subconscious fears of what goes bump in the night.