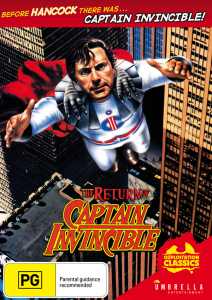 You probably didn’t know that not only is The Return of Captain Invincible an Australian film, but our very first superhero movie (not to mention a rare hybrid musical to boot). Dwelling in the abysses of alcoholism, a retired Captain Invincible, played by American actor Alan Arkin, has been living in Australia long since his days of saving the world came to an abrupt end when accusations of communism were hurled by the powers that be.  When the forces of evil returns, our hero is asked to became the symbol of peace and justice he once was.

Watching what is now a legitimate Ozploitaion classic, I was reminded of an amusing incident in primary school when our Grade 5 teacher rented the wrong version of Journey to the Center of the Earth, subjecting us to something that was nothing short of baffling with no educational quality. I’m in no way knocking The Return of Captain Invincible, but I won’t deny that it has the “what did I just watch” factor. Lampoonish of the super-hero genre that is now widely celebrated and over intellectualised, the film is a fun and unique experience that’s worthy of a place in anyone’s collection for its obscure nature alone.  Alan Arkin is a good fit in the titular role well, although his performance often suggests that he never bothered to read the script, which is hilarious, while Christopher Lee hams is up as the villainous Mr. Midnight and sings up a storm because this movie is also a semi-musical.

The Return of Captain Invincible was recently released on DVD by Umbrella Entertainment and I was pleasantly surprised by the transfer which is both remarkably sharp and clear. Unfortunately, there is no bonus content except for a theatrical trailer to whet the appetite of potential viewers, it’s a title that comes recommend nonetheless!