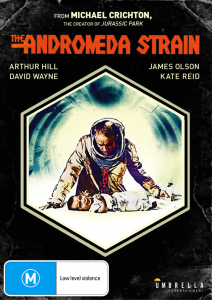 I can’t imagine a lot of people jumping up and down for this DVD, but as a keen fan of ‘70s science fiction Umbrella Entertainment has made an exceptional choice with adding The Andromeda Strain to their library. Based on Michael Crichton’s 1969 novel of the same name, a group of scientists are faced with dealing with earth’s first biological alien virus, which wiped the sleepy town of Piedmont, New Mexico virtually off the map. With an underground state-of-the-art government laboratory at their disposal, it’s a race against time to determine the virus’ nature.

More often than not, what strikes me most about this particular ear of sci-fi are the real-world scenarios or hypothesis that are explored, with the visual style arching back to a futuristic appearance that was prominent throughout the genre during the 1950s when the premise and concept was mostly far-fetched. This element of the film can mostly be seen through its set design which is outstanding, even by today’s standard and at the time were describes as “one of the most elaborately detailed interiors ever built”, according to one Hollywood insider. The stakes are extremely high as our character’s scramble for answers; you can feel the immense pressure they’re under, which in part stems from the isolated location. From start the finish audiences are in for an intriguing and jarring experience.

Despite being a bare-bones release, video quality is remarkably crisp for a DVD and the 2.0 Dolby track is nothing to scoff at. To my surprise The Andromeda Strain is region free, which makes it an ideal product for perspective overseas customers who are in the market for some classic cinema, and having seen it earlier this year on Netflix I’m more than please to own my very own copy.