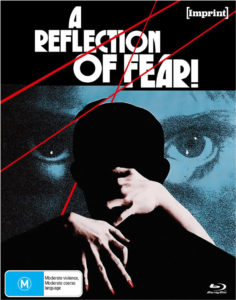 I’m sure many will agree that Sondra Locke never really got her due as an actress despite being nominated for an Oscar for her debut role in The Heart Is a Lonely Hunter. Prior to hitching her wagon to Clint Eastwood, who would ultimately destroy her career with the help of his pals at Warner Bros, the fair-skinned beauty was doing her own thing in the early 70s. Juggling between film and television roles, the obscure thriller A Reflection of Fear, co-starring Robert Shaw, has come to Blu-ray for the very first time, another exclusive for boutique label Imprint Films.

Locke plays a disturbed young woman, fighting between what appears to be a sinister duality, which intensifies upon the arrival of her estranged father, Michael (Shaw) whose instant affection toward his daughter goes beyond that of fatherly.

A Reflection of Fear, while considered a horror film, is relatively light as there’s a not a drop of blood in sight. Although, the many screams from Locke are undoubtedly bloodcurdling and her aloof performance brings about a general feeling of unease.

Based on the novel Go To Thy Deathbed by American writer Stanton Forbes, there’s a clearly an English gothic influence which has carried over onto the screen, that’s most noticeable with the central location of a country mansion in Eastern Canada. Often the film seems almost timeless, despite being set during present day, feeling like an old gothic thriller while in many instances, shot like a classic Giallo.

It’s a slow burn throughout most of the 88-minute runtime, but it does require your attention for the subtle clues pertaining the strange violent occurrences, ushered in with nightfall. Without going into spoilers, identity, sexuality and incest, are among the themes that dominates the plot, personified by Locke as our tormented heroine, Marguerite. 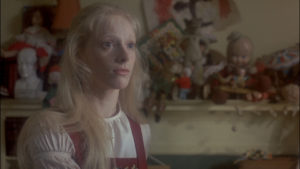 Unfortunately, the film’s visual style doesn’t lend itself much to high-definition as the colours are very muted and the picture itself appears very washed out as if blanked by a dream-like fog. Although, on the plus side, the1080p presentation is vey clean with a gentle amount of film grain on the 1.78:1 image. I can’t seem to escape Mono soundtracks. Not that they’re bad, it’s just that I’ve finally upgraded my surround sound system after 14 years, but this particular LPCM 2.0 track is among the best I’ve heard recently with good volume and clarity, plus the authenticity that comes with uncompressed is always appreciated. English HOH subtitles are included. 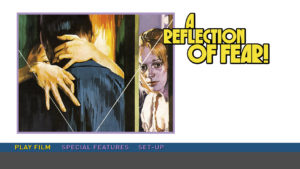 Imprint’s release of A Reflection of Fear comes with two new featurettes, including a commentary, which are a great example of “quality over quantity”. Suffice to say that critic Lee Gambin is a big fan of the film as his enthusiasm and appreciation for the thriller is infectious in his solo commentary, which discusses everything from the work’s aesthetic to its themes. The audio interviews with the movie’s stars Sondra Locke and Gordon DeVol are also moderated by Gambin and stitched together; presented in the fashion of a commentary, they are played over the film. The actors both give their own take on A Reflection of Fear’s themes, while detailing how they got involved in the picture. Unfortunately, the audio is quite poor for Locke and DeVol’s interviews and are difficult to decipher via a home cinema sound system; it is recommended that they are viewed on a computer or with headphones. While I see the economic value in presenting both interviews together, I would’ve preferred them to be separate, and placed over a photo slide show. – by Hannah Lynch

While a very modest release overall from Imprint, the packaging is of the usual high standards with differing artwork between the glossy slipcover and the case, reflecting the different styles, visually and thematically within the film. A Reflection of Fear doesn’t really peak at any point and like many classics from the 70s, it ends very abruptly, but there’s much to dissect and discuss afterwards the credits roll. 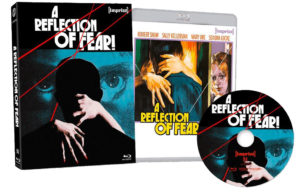 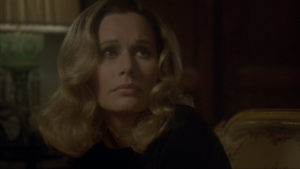 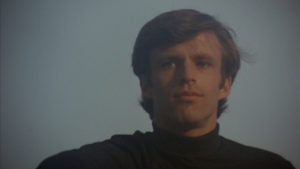 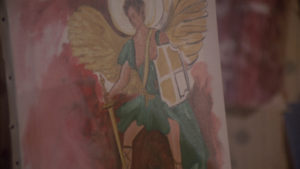 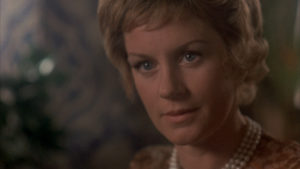 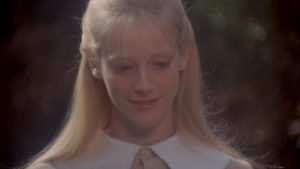 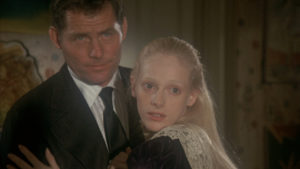 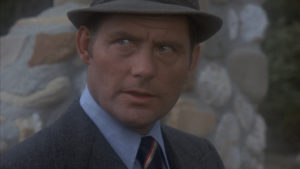