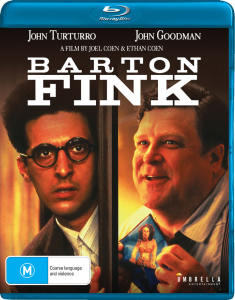 Joel and Ethan Coen have entertained film audiences for over 35 years by exploring the dark psyche of man in a wide variety of features that often come with a quirky and humorous bite, which has become the duo’s signature style. Barton Fink, a notable but sometimes overlooked early entry in their filmography, is out now on Blu-ray from Umbrella Entertainment.

John Turturro stars as the titular lead, a humble writer for the common man, who has just made it big on Broadway with a hit play, one that reflects the social mood among the working class as opposed to telling tall tales. As fate would have it, Hollywood has come knocking with a lucrative offer to write for the big screen. Fink reluctancy takes the job with his first script to be for an upcoming wrestling picture.

Barton Fink is not overtly dramatic nor comedic, which isn’t unusual for the Coen’s, but I think it’s one of their strangest films, even edging towards horror with a number of visual nuances that are disturbing in retrospect. The creative vacuum of the Hollywood machine is portrayed as soul-crushing, or maybe consuming is the more appropriate word, as Fink’s devotion to his craft means very little in a business with its own ideas, where the executives only want to hear broad strokes. Between staring at his trusty Underwood typewriter (an intimating site for writers like myself whose masters are auto-correct and Grammarly) our fish-out-of-water meets an interesting assortment of individuals. Next door neighbour, Charlie Meadows (John Goodman), an insurance salesman, makes good company for Fink as the two bond over the regularness of life from inside their drab and unbearably hot hotel. W.P. Mayhew, an admired novelist played by John Mahoney, represents what might become of Fink should he succumb to the industry and abandon his aspirations. However, Mayhew’s long-suffering wife Audrey, played by Judy Davis, tries to help Fink out of his creative slump. With his aggressively fast-talking producer, Ben Geisler (Tony Shalhoub) bearing down for material and the blind faith instilled by the boisterous studio boss, Jack Lipnick (Michael Lerner), the pressure to deliver takes its toll on our protagonist. The increasingly bizarre nature and sudden plot twists have Fink questioning his reality in this personal hell. Performances from practically everyone are first-rate, especially Turturro and Goodman, who are both perfect examples of the eccentricity the Coens give many of their leading and supporting characters. 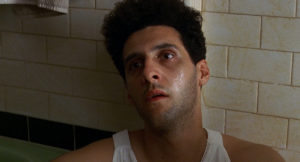 Umbrella’s release of Barton Fink is a re-issue of the 2011 edition put out by Universal, although, the menu screen has not carried over in favour of increased viability,  butchapter breaks are thankfully still in place. Presented in 1.85:1 widescreen, the image is quite sharp, perhaps a little too much and edge enhancements are very noticeable throughout, which is a tell-tale sign of a dated transfer. Darker scenes display quite a bit of noise, but colours overall are very strong, helping to enhance the Coen’s very visual style of storytelling. The disc’s 2.0 DTS-HD track is very robust in volume and comes through quite clear, allowing the slightest of audible details to be heard, that at times are significant to our struggling writer’s experience.

I’m not sure I understand Barton Fink entirely, but I think I’m safe in saying that it’s a story about the death of dreams or a metaphor for creative purgatory. Needless to say, it’s a movie you’ll probably need to see more than once, even to just examine the stunning and rather telling cinematography by Roger Deakins. 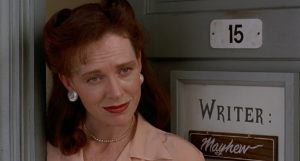 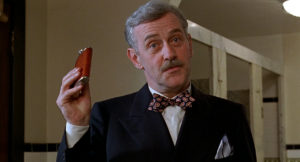 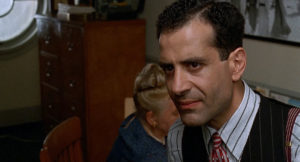 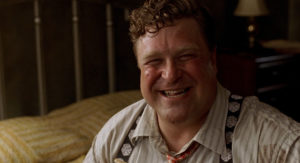 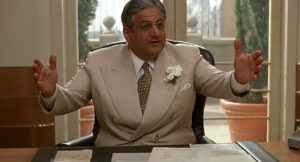 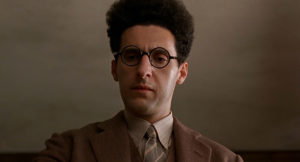 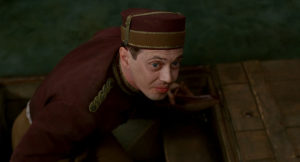