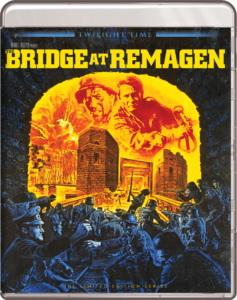 Historical accuracy aside, classic Hollywood war pictures were always well-intended in telling stories of triumph and victory, mostly over Nazi-occupied Europe and while many decades have passed, there’s still an appetite for the heroism of World War II. In 1969, just shy of twenty-five years since the most destructive conflict had ended, it was a topic still resonating highly with film audiences, even after the magnum opus that was The Longest Day, released seven years earlier. The Bridge at Remagen, currently available through Twilight Time Movies, has the Allied armies advancing on the last bridge over the Rhine River into Germany, where the enemy has decided to destroy the landmark, trapping tens of thousands of their own men on the other side.

Set during the final months of the war, we’re presented with two sides at the mercy of their respective high command. While the Americans are eager to end the war early, a delusional Hitler and his subordinates are determined to prevent the invasion of their fatherland despite dwindling resources. George Segal leads a unit on the “cutting edge” as Lt. Phil Hartman (eerie coincidence) tasked reaching Remagen unaware of the German’s plan. Battle-hardened and exhausted, our hero soldiers on (pardon the pun) despite the growing futility of his mission with his number two, Sgt. Angelo, (Ben Gazzara) who helps to spur on the men while shamelessly scavenging valuables from the dead. On the opposite side, Maj. Paul Krueger (Robert Vaughn), is assigned to oversee the prized bridge’s destruction but is quietly asked to hold out as long as possible with the promise of reinforcements, but to finds the situation growing futile as the Allied advance begin to unleash their immense firepower from afar. The Bridge at Remagen highlights an interesting scenario in which the intent of both sides almost cancels each other out, giving viewers much to ponder over. With the war practically won, the idea of the victorious side forcing their men to cross a bridge wired to blow at any moment seems ludicrous; while Germany’s military leaders refuse to face reality as they abandon morals and principals to maintain a false notion of repelling the enemy. Segal and Vaughn are both excellent counterparts as Hartman and Krueger, who have unspoken mutual respect and resentment towards their commanding officers. Performance-wise, Segal is especially rugged and abrasive, while Vaughn is dignified and sympathetic despite the shaky German accent. Bradford Dillman as Maj. Barnes epitomises the disconnect between those watching on in relative safety and those in the thick of it. Dillman is perfect in how he portrays Barnes as a pitiful figure, who simply doesn’t know how to talk to his men and more importantly empathise. Bridging the heavy-hitting subtext with the more celebrated side of war films is Gazzara as Angelo, aka Angel, who is very intimidating behind his smile and moments of levity, but a great supporting character to have in a film of this calibre.

Presented in 2.35:1 widescreen, The Bridge at Remagen was subject to the popular big-screen treatment of Panavision during its run in theatres, as the image noticeable curves during some long panning shots. Movies this good makes my mouth water for one of the curved-screen TVs, but the image looks amazing on a conventional flat screen with 1080p pushed to its limits with high clarity. Realistic levels of colour and a nice amount of film grain add to the film’s grit. Sound blasts in 1.0 DTS-HD MA which came through loud and clear via the two speakers attached to my PC, but was lower in volume through my surround sound system, which I think is due for an upgrade. While the track is heavy with sound effects as you can image, the level of base isn’t quite as powerful, but it’s an immersive experience regardless.

An effects-only track would have been ideal given the constant sounds of battle, but the military-style music by Elmer Bernstein is more than worthy of the isolated music track, which is at its most prominent during the theatrical trailer. Featuring cover art lifted from the film’s original poster, a nice series of production photos inside the booklet are complemented by Julie Kirgo’s informative essay. 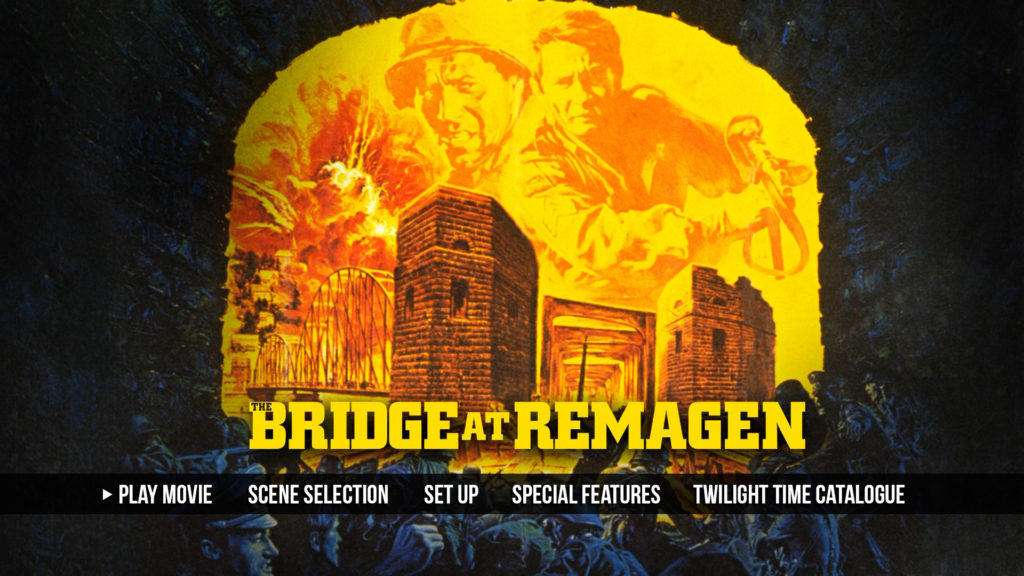 The Bridge at Remagen matches the action and technical splendour of lager scale productions with tanks, artillery and bombers raining down destruction that never grows tiresome, and has a real feeling of authenticity behind it. I absolutely loved it for all that was covered the 117-minute runtime, in particular, the desperateness the film portrays.