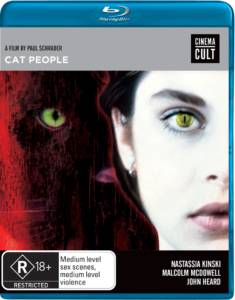 Set in Louisiana’s lively capital of New Orleans, the humid climate of American’s deep south adds a great deal to the film’s radiant quality, which is propelled by personal desire and sexuality. Our female protagonist, Irena (Nastassja Kinski), is an innocent young woman who invites an almost instant curiosity and attraction from those she encounters. Between the persistence of her lustful brother, Paul (Malcolm McDowell), to the kindness from smitten Zoo curator, Oliver (John Heard), the rush of attention triggers an animalistic reaction that she can barely contain. While some of the plot points and story elements edge towards being somewhat ludicrous, Cat People dramatically breaks from the conventional on-screen romance. Rather than long-winded scenes of casually-analytical dialogue about the opposite sex, we have a film that explores how people respond to each other on a primitive level where words are not required. It’s often violent, explicit and raw, but a visceral journey that’s further enhanced by a sensual and resonating theme from Giorgio Moroder and David Bowie. Nastassja Kinski is perfectly cast as Irena, her youthful looks and fragile exterior make her transformation, both emotionally and physically far more substantial and she portrays those sentiments extremely well. Supporting characters are strong, particularly John Heard as Irena’s love interest Oliver, who is arguably the film’s male lead. Heard was fine actor who sadly never quite got his due before his sudden passing in 2017. Annette O’Toole is a nice addition as the neutral friend Alice, while Malcolm McDowell naturally stands out as the predatory Paul in a very unnerving performance.

Cat People is a dark film both figuratively and literally, but the HD transfer is quite pronounced and generally consistent, with moments and sudden bursts of bright colours appearing very vibrant. Blood especially looks disturbingly true-to-life during one scene in particular. Given the film’s popular soundtrack, many would have high expectations regarding audio quality and even with just a Dolby Digital 2.0 track on offer, it far from disappoints. David Bowie’s signature contribution pulsates throughout, and having watched the film via a high-grade sound system, it’s immersive to say the least.

Over thirty-five years later, Cat People remains a polarizing film among audiences, especially many fans of the 1942 original, who see it has exploitive above all else. I personally found it to be a surreal experience as it’s a film with tremendous atmosphere and stunning photography, and one I recommend watching during the summer months.