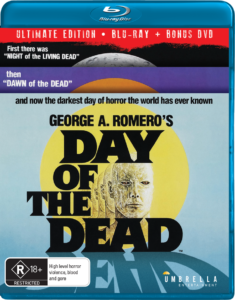 Unjustly criticised upon its release, with some prominent film critics missing the point entirely, George A. Romero’s Day of the Dead has since become recognised as one of the most significant and influential zombie films of all time; on equal footing with its two predecessors, Dawn of the Dead and Night of the Living Dead. If you’re a new fan to Romero’s brand of the zombies or a fan bitten by the collecting bug, then Day of the Dead – Ultimate Edition on Blu-ray from Umbrella Entertainment is strongly recommend.

Set some time after the events of Dawn of the Dead, a small group of military officers, scientists, and civilian contractors are held up at an underground facility in the Florida Everglades. Desperately low on supplies, equipment and morale, the search for answers to the plague of zombies that aimlessly roam the world above grows futile. Unlike the previous entry, which deals with the initial outbreak, Day of the Dead looks at the aftermath, exploring a clash of ideas and attitudes between the three aforementioned factions. Dr. Sarah Bowman, the film’s pragmatic lead, must face off with the few remaining military personnel led by the frustrated Captain Rhodes. Meanwhile head scientist Dr. Logan believes the zombies can be trained after performing numerous surgical dissections, earning him the nickname ‘Frankenstein’. Prolonged isolation has weighed heavily on our characters, which the film represents well via the colourful personalities that run rampant. Repeat viewings will no doubt cause viewers to notice additional details in the film itself and its players such as, what were our leads like before everything went to hell? Could the self-awareness of Dr. Logan’s undead guineapig ’Bub’ be nothing more than abnormality or did it takes the apocalypse to bring out Captain Rhodes’ homicide tendencies?

“The power’s off on the mainland in case you haven’t hear and all the shopping malls are closed.” – McDermott

Despite a cast of unknown actors, some coming from theatre, performances are strong, if not a little over-the-top. Lori Cardille proves more than capable as Sarah while Joseph Pilato as the maniacal Rhodes chews up the scenery, and it’s fantastic! Terry Alexander and Jarlath Conroy provide ample levity as pilot and radio man John and McDermott as our grounded, audience stand-ins. I’d be remiss if I didn’t mention the gore and make-up effects, by Tom Savini, which are as disgusting as they are impressive and possibly the finest achievement during the film’s era of independent filmmaking. Even with all its excess, there’s still restraint in place to ensure story takes precedence over the visual horror.

One could easily lose count of the amount of times Day of the Dead has seen a HD release, let alone DVD and even VHS to a lesser extent. Umbrella’s second effort, superseding their previous two-disc edition from several years ago, appears to rival the 2013 collector’s edition from Shout Factory on both a visual and audible scale. Sharpness and clarity have improved substantially while colour is a lot more vibrant, especially during outdoor scenes. Previously, the film had often appeared quite pale, lacking texture and definition, but I think we’re finally at a pinnacle and I couldn’t be happier. Sound comes presented in 5.1 DTS HD Master Audio and packs the biggest punch via the film’s distinctive soundtrack.

Offering a ‘Greatest Hits’ package of bonus content, comprised from previous releases, the subtitle of “Ultimate Edition” is far from an overstatement. I spent two nights making my way through both discs, beginning with 50-minutes of behind-the-scenes footage, much of which had been provided by Tom Savini. For a film that’s famously known for its practical elements, the level of effort and painstaking detail applied to the film and its many undead extras is astonishing, not to mention the actor’s patience; Joe Pilato being fixed to the floor while having to endure the sight and smell of rancid entrails is just one example. Gateway Commerce Centre is a rather appealing presentation advertising the film’s subterranean location of Gateway Commerce, formerly Wampum Mine in Pennsylvania, which shows off the excessive floor and office space in addition to the practical means of mass storage.

For the aesthetic side of things, Umbrella have gone with the film’s original theatrical poster to serves as the Blu-ray’s cover art, a move which I’ve always appreciated, although some excellent reversible artwork is included by the one and only Simon Sherry, giving the edition a unique quality. 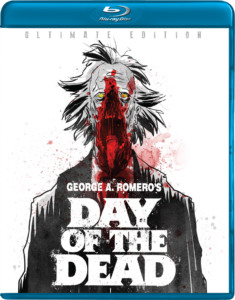 For more up-to-date content, World’s End: The Legacy of Day of the Dead is an excellent feature-length retrospective documentary in with the cast and crew reflect upon the making the film and its subsequent impact on horror and the zombie genre overall. Romero’s live interview at the 2008 Melbourne International Film Festival looks more at the social aspect of his undead series as he answers questions from the audience. The Many Days of the Dead and Reflections on the Living Dead are two vintage featurettes which generally cover the same ground, but still serves as a highly informative resource for not only Day of the Dead, but the original Night of the Living Dead.

Joe Pilato gets his due with two in-depth and personal featurettes, Joe of the Dead and Travelogue of the Dead, the latter of which finds the beloved character actor touring Ireland and Scotland much to the delight of long-time fans.  His laid-back demeanour and drawn out anecdotes make him one of the unsung heroes of supplement material story-tellers.

Regretfully I dragged my feet a little before reviewing this release, but I can safely say that Day of the Dead – Ultimate Edition is easily among the very best of Umbrella Entertainment’s incredible 2018 line-up and a must own for any fan. Here’s hope the same treatment soon awaits Dawn of the Dead.