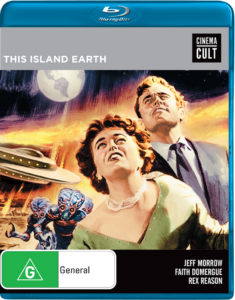 While last year’s line-up of Cinema Cult releases focused on the lesser known from names synonymous with horror, I was glad to see the label find dip their toes into some 50s science fiction with This Island Earth. Often regarded as a quintessential title, Universal Studio’s first colour entry in the popular genre follows a rather convoluted plot involving aliens who come to earth seeking the brightest scientist to help with their war, which requires a greater means of energy to fight.

Made ten years after the first atomic bombs dropped bringing about the end of WWII, this picture wonderfully preserves the collective optimism regarding scientific advancements in the western world.  As shown with the ambitions of our alien and earthy protagonists, harnessing and applying mass amounts of energy took center stage, regardless of the risks involved to (non)human life. Unfortunately, whatever statements the film makers attempted to make with this aforementioned reflection gets lost in the shuffle of showing off impressive special effects, and ground breaking aerospace technology. Character development and story also suffers greatly in favour of prolonged sequences depicting explosions, space travel, and alien advancements. Needless to say, while nice to look at many haven’t aged particularly well, but I appreciate the practical elements and stunning use of matte painting, which help illustrate the cavernous alien world while under attack from Zagon starships. Rex Reason as our baritone lead Dr. Cal Meacham fits that typical mould of B-list stars, while Faith Domergue as his old acquaintance and peer Dr. Ruth Adams holds her own. Heading the extra-terrestrial visitors is Jeff Morrow as Exeter, who’s spray-tan completion overly large forehead gives him a distinguishable appearance that has since become iconic among images of 50s Hollywood.

One couldn’t ask for a better HD transfer than this Cinema Cult release which boasts colour picture quality; sharp with excellent clarity, ample fil, grain and colour balancing. Sound on the other hand is clear, but the 2.0 Dolby track is rather flat in comparison. Presented in 1.85:1 widescreen, the disc is region B encoded while disc formatted is mistakenly printed as “B&W NTSC” on the rear cover, whereas the film is very much in colour as mention above.

This Island Earth may drop the ball in many regards, but it should not be dismissed as B-movie fodder as it’s truly a product of its time. Audiences today may be left a little baffled by the distracted narrative, but the staple title is entertaining nonetheless which was celebrated wholeheartedly in Mystery Science Theater 3000: The Movie.