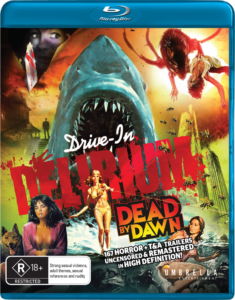 Dive-In Delirium is back, the staple trailer compilation series from Umbrella Entertainment, who have two new massive volumes for genre fans to sink their fangs into, starting with Dive-In Delirium: Dead by Dawn, uncensored and remastered in two parts, The Final Chapter and A New Beginning.

We once again we begin this latest volume in a digitally rendered drive-in theatre in the middle of a seemingly edgeless landscape, or a conceptual afterlife for die-hard film fans where the credits never roll. Before the show-reel of trailers commence, a bunch of retro advertisements help set the mood while building an appetite for snacks. We kick off with a barrage of creature-feature snippets such as Zaat (trust me, it’s all in the delivery) and the serpent-themed horror Spasms, starring Oliver Reed. Hammer Horror and Amicus Productions takes up a sizeable portion, and rightfully so, showing off a stack of their staple titles like anthology classic, Asylum, and the very groovy Dracula A.D. 1972. Unfortunately, what follows is almost 90 minutes of painfully slow trailers showing casing a miscellaneous blend of Italian and other European thrillers that are un-apologetically spoiler heavy. Thankfully, A New Beginning is a welcome reset with Bugs Bunny and The Monkeys providing the pre-show before an ensemble of Hollywood thrillers start things off. Alfred Hitchcock’s guided-tour trailer for his 1960 masterpiece Psycho is perfectly dark and comedic, wedged between two of William Castle’s gimmicky classics, 13 Ghosts and cash-grab title, Homicidal. We then transition to a balanced mixed of B-picture favourites and more acclaimed titles, for example, Black Christmas and Silver Bullet, easing into lighter territory with comedies like Young Frankenstein, Caddyshack and Back to School.

While the entertainment value of Dead by Dawn tends to shift, the quality of the 167 remastered trailers in HD never ceases to amaze, many of which are sourced from the bowels of exploitation cinema. Most, if not all, still retain their tattered appearance, allowing them to fit the drive-in theme and aesthetic. Aspect ratio varies as you would expect, but the region-free disc is presented in 16:9 widescreen and sound is appropriately basic but loud in a 2.0 Dolby track.

Following up on the bonus compilation featured in Drive-In Delirium: The New Batch, videotape enthusiasts are treated to 96 minutes of SD trailers, complete with bad tracking and moments of muffled sound. I wouldn’t say there’s any particular theme to the trailers, it more of a roll-of-the-dice mix ape, which keeps things fun. If you’re like me and found VHS to be constant head-ache, then the less than desirable quality may be triggering. However, I do appreciate the novelty and couldn’t help but feel a little nostalgic for the flawed format.

Dive-In Delirium Dead by Dawn isn’t the best volume in the series, that distinction goes to inaugural release, 60s and 70s Savagery, but like always, I’m left with a nice list of titles to seek out, which is always exciting.