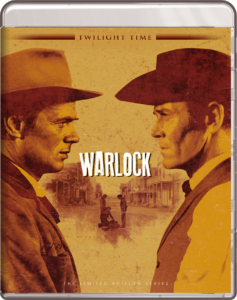 I enjoy westerns, be it the classics or modern titles, but not so much for the gun play, more for the exploration of morality in a savage land while our hero ponders his or her mortality. Edward Dmytryk’s Warlock does exactly that and then some, a remarkable genre piece out now on Blu-ray from Twilight Time Movies. Starring a trifecta of Hollywood heavyweights, Richard Widmark, Henry Fonda and Anthony Quinn, a renowned gun-for-hire becomes the Marshal of the small mining town of Warlock, currently under the ravages of a rogue gang.

Warlock offers up the typical scenario of a put-upon town desperate for help, but when salvation arrives in the form of gunman Clay Blaisedell (Henry Fonda) and his trusty sidekick Tom Morgan (Anthony Quinn), the road to law and order takes a number of interesting detours. Richard Widmark is Johnny Gannon, a lowly outsider among the band of rabble-rousers, who sticks around to keep a watching eye over his young brother, Billy. Despite his unlawful association, Johnny surprisingly takes the vacant position of deputy Sherriff in an effort to end the violence within the confines of the law. Our hero quickly finds himself at odds with Blaisedell, who has his own tried and tested methods of handling trouble. Both men, each of whom are equally righteous, subscribe to different ways of thinking, symbolising the loosening grip of lawlessness on the old west, which was definitely the case during the film’s setting of 1881. Richard Widmark and Henry Fonda are two of my favourite actors and to watch them face off as the film’s flawed heroes gave the film a unique dynamic with both actors act their best in their respective roles. Anthony Quinn brings a slightly menacing presence as Tom Morgan, whose devotion and feelings towards his partner, Clay, are ambiguous. Not only does he prefer their arrangement as hired crusaders, but does take to anyone coming between them, man or woman. I honestly wasn’t expecting an underlying theme of this nature in a 1950s western, but I admire director Edward Dmytryk for bringing it as close to the audience as possible during such a conservative era.

I’ve been keen to review another colour release from Twilight Time since Melvin and Howard, and I was not disappointed with Warlock, which looks absolutely gorgeous. In true Hollywood western style, Color by Deluxe is at its most splendorous with a perfect marriage of fine grain and texture, which bring out a great level of detail. Matte paintings of the titular town seen in approaching shots really speak to what a lost art form the technique has become in this digital world. Not only do they blend in well with the landscape, but tiny live-action details like a rider galloping down a corner street can be seen quite clearly. Blue appears to be the most dominant colour in the image pallet, most noticeable during interior scenes, adding to the film’s rustic quality. Sound is powerful and crisp on the disc’s primary track of 5.1 DTS-HD Master Audio, while a secondary 2.0 DTS-HD track is a solid alternative with louder volume. Overall, both match the picture in terms of quality and even with most basic of sound systems, you’ll most likely be impressed.

I’m noticing that isolated music tracks are becoming the norm with many classic releases on Blu-ray, a feature that I admit to never really utilising, but Warlock has enabled me to understand and appreciate their value. With such pristine audio, accentuating Leigh Harline’s magnificent scoring, simply having the movie on whilst attending to mundane tasks or even during a social gathering would certainly lift the atmosphere, and probably win the film some new fans. Serving as the perfect appetiser before the show, a Fox Movietone Newsreel features a Hollywood gala event with star Henry Fonda in attendance. In this age of 24/7 news, it’s a nice little time capsule for how it the medium was once delivered. Inside the case there’s a neat booklet featuring an essay by writer and historian Julie Kirgo, highlighting some the less apparent themes and social undercurrents.

Warlock might be the greatest western you never hear of, with all the classic tropes such as quickdraws, stand-offs, fistfights, plus more. Oh, and there’s DeForest Kelly in memorable pre-Star Trek role, so that’s an added bonus.