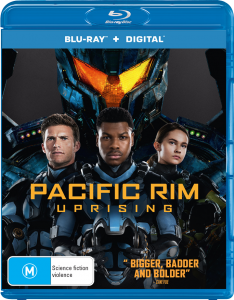 I consciously skipped Pacific Rim: Uprising during its run in cinemas earlier this year, simply due to a lack of interest despite my enjoyment of Guillermo del Toro’s original from 2013. However, thanks to the ever quickening turn-around time of home media, I caught up with the long awaited sequel on Blu-ray, out now through Universal Sony Home Entertainment. Upon reflection of my earlier decision to skip the big screen treatment, I’ve clearly dealt myself a disservice. Leaping forward to the year 2035, ten years after the ‘Battle of the Breach’, Jake Pentecost (John Boyega), son of legendary Jaeger pilot Stacker Pentecost, helps lead a new generation against an emerging Kaiju threat.

Pacific Rim: Uprising didn’t fair too well with fans and critics upon its release and despite the sequel being a play-by-numbers affair, I had no difficulty enjoying the movie for an entertaining escape from reality. The world created within its predecessor carries over seamlessly, and being built on appropriately, takes viewers ten years forward to show off its believable logical advancements and societal progress. Action sequences are more frequent this time around, but are nonetheless thrilling with intense Jaeger-on-Jaeger fistucuffs that show off every-improving capabilities of modern digital effects. Practical elements that do exists are generally confined to small-scale sets, which blend in well with the many stunning CGI backdrops that are on display. New characters for the most part represent typical archetypes, most evident with Jake, who is played wholehearted by John Boyega, along with his strong willed off-sider Amara (Cailee Spaeny). Scott Eastwood as Jake’s rival Lambert is a notable presence, although doesn’t contribute effectively as principal supporting player. Burn Gorman and Charlie Day both return as Hermann Gottlieb and Dr. Newton Geiszler, bringing once again a comedic relief to dire situations and the remaining cast of international faces are in line with film’s “global effort” theme.

Presented in widescreen 2.40:1, picture quality is at the pinnacle of 1080p on this particular Blu-ray disc, which serves the film’s often bright and wild colour scheme extremely well. Details of the most minute level are noticeable, particularly during scenes of urban destruction, of which there are a plenty. Sound fills the room in Dolby ATMOS, my first home cinema experience with the immersive track, and despite my aging sound system I was genuinely amazed by what came through its speakers. Effects of a mechanical nature are by far the most impressive with every clunk, grind and lock perfectly audible.

Nine mini featurettes cover the various elements of the film, particularly the design, technology and characters; all amounting to over 30 minutes of informative bonus content. It’s encouraging to see a new title being given a worthy release on home media as bare-bones editions are becoming unfortunately more widespread among mainstream distributors. Complete with a digital copy, this standard Hi-Def release is well worth its $26 price tag.

Pacific Rim: Uprising works more on superficial level as opposed to the heart and emotion found in Del Toro’s original. Nevertheless, this sequel is a fun popcorn movie that requires little of its audience other than the ability to take in the spectacle of what is an enthralling action/sci-fic adventure with giant robots and monsters as the stars.