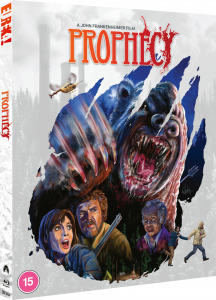 I first came to learn heard of Prophecy while reading an article about the passing of actress Victoria Racimo, late last year, who many of us film fans know as Nurse St. Cloud in Ernest Goes to Camp. Coincidentally, both movies have a prominent Native American element, but unlike the aforementioned screw-ball comedy, Prophecy explores a horrifying violation against nature at the hands of big industry.

Available now on Blu-ray from Eureka Entertainment, with new bonus content, this John Frankenheimer classic is an environmental horror that follows a city couple who travel to a secluded region of rural Maine to mediate a conflict between a logging company and the local Native American tribe. However, they’re all in for a big surprise because today’s the day a mutated bear has its picnic.

Prophecy sounds good on paper, which I’m sure it is if screenwriter, David Seltzer’s novelization is anything to go by, but the core idea behind what is still a relevant story is undercut by a somewhat hokey featured monster. While it’s more or less a grizzly bear gone wrong due to industrial toxins, it’s quite grotesque in appearance, but at the same time not very creative, and we see far too much of it. With such an abundance of wilderness and natural canopy to hide the creature, a Jaws-like approach would have resulted in a far more genuinely terrifying movie for its target audience.

Talia Shire is top-billed but plays a more supporting role as Maggie, wife to Robert Foxworth as Robert Verne, an overworked city Doctor who opts for a change of scenery to where he might possibly be able to make a difference to people. Maggie is pregnant, whose apprehension about motherhood mirror the consequences of contamination to the film’s outdoor setting, the thought of which is arguably far more terrifying.  Then of course there’s the Native American angle to our story, which delves into their connection to the land and spirituality, which I’ve always found particularly interesting. While the casting may not be the most authentic, such as Italian-American actor, Armand Assante, as the brave John Hawks, I like to think the film is respectful of native beliefs and practices.

Many labels of late have been vaguely promoting releases as ‘1080p presentations’, but Eureka has specified that Prophecy comes from a high-definition scan of an unspecified film element, but rest assured, it looks really nice. Shot primarily in British Columbia, Canada, the natural environment comes through beautifully via a wide 2.35:1 image with colours retaining their natural appearance, free of enhancements and a gentle blanket of film grains add just the right amount of texture. Sound is equally impressive, but details are not listed at this time on either Eureka’s website or Blu-ray.com, but unless my ears deceive me, we’re talking a solid 5.1 Dolby track. English SDH subtitles are included. 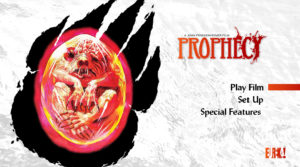 Darren Wheeling’s paperback novel-inspired artwork is far less subtle than the ominous theatrical poster of the film’s creature in embryo form, but it suits Eureka’s alternate style. New audio commentaries set this Limited Edition apart from its Blu-ray predecessor and the track by Australians, Lee Gambin and Emma Westwood is of particular interest in light of their commentary on Long Weekend, another nature-oriented horror film.

David Seltzer, talks about his creative spark as a writer, which came from a rather morbid tendency for “over remembering” events as a child. He’s quite candid about the film not measuring up to his original written treatment but is grateful for the newfound appreciation from modern audiences. Tom McLoughlin, who’s very much a product of the late 60s, charts his career as an artist which reached a high point when sitting in the director’s chair for the popular Friday the 13th sequel Jason Lives. It was interesting to hear from the ‘guy in the suit’ and much like Seltzer, he had some misgivings about the Prophecy but has embraced the more recent fanfare surrounding the film.

Prophecy is a tad disappointing, but its message of conservation, stunning cinematography during both day and night, performances from the cast and the release overall, certainly justify the purchase. Watch it on the biggest screen possible.