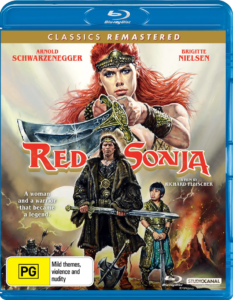 Saturday afternoons as a child were often spent in Robert E. Howard’s Hyborian Age, through Conan the Barbarian, its lesser sequel, Conan the Destroyer and the illegitimate third instalment, Red Sonja; all of which were on constant rewind. Now the female-centric fantasy/adventure has returned after a dazzling 4K restoration by StudioCanal, available now on DVD, Blu-ray and 4K Ultra HD.

After her family is slaughtered at the hands of the tyrannical Queen Gedren, our titular heroine is granted extraordinary abilities by a spirit that is never really explained; I guess it was just a case of right place, right time. Nevertheless, the mysterious force tasks Sonja with stopping the evil Queen, who has captured a powerful weapon that cannot be controlled.

Red Sonja has been subject to much ridicule over the past thirty-odd years since its release, even from the most die-hard fans of 80s genre cinema, but granted, the film has its merits.  You could best describe it as Conan dialled down for younger audience, yet despite the very questionable PG rating, Red Sonja almost seems to be fighting against itself at times. We have the obnoxious young Prince Tarn (Ernie Reyes Jr.) along with his heavy-set servant, Falkon (Paul Smith), who may or may not be doing yellowface; characters clearly designed for kids, yet minutes after their introduction, Sonja must fight off Lord Brytag for not offering herself to him. Coupled with Gedren’s aggressive lesbian energy along with heads and limbs being hacked off, it’s a pretty wild ride of a movie say the least.

Arnold Schwarzenberg to his credit takes a back seat as our secondary hero, Kalidor, departing from a good portion of the film, allowing the viewers to latch on to Sonja’s character and cause. Kalidor is practically Conan, even down to the look of his sword and in my head-cannon, this a more civilised and selfless version of the once famed barbarian, travelling under an assumed name, serving for the greater good. Brigitte Nielsen holds her own as Red Sonja despite her lack of acting experience. She’s physically a strong presence and can wield a sword with impressive strength and force. Nielsen has rightful place in film history as the character whose look continues to inspire.

I haven’t made the leap to 4K, but if this Blu-ray edition doesn’t impress you, I would suggest an appointment with your optometrist. The 2.35:1 image has a remarkable level of detail and texture, with the most vibrant of colours which greatly enhance the film’s aesthetic. While not a criticism, I would exercise caution when blasting the 5.1 DTS-HD Master Audio track trough a home theatre system, as it may cause seismic activity. However, dialogue is a relatively flat, but loud in volume, which is always a plus.

Studio Canal’s release of Red Sonja comes with two all new featurettes, one which focuses on the film’s making-of, and the other exclusively on the career of its male star; both run around 15 minutes each. For the Arnold Schwarzenegger retrospective, several film-makers, some who’ve worked with him, others who are simply fans, offer up their thoughts on the actor from first impressions to recent surprise at his political accomplishments. Red Sonja’s assistant director, Michel Ferry, who appears in the prior featurette, is the sole interview subject for the film’s making-of but goes quite in-depth on his experience including his disappointment at the products end result. Appreciators of poster art will no doubt enjoy the 97-minute-long documentary on painter Renato Casaro, who offered his talents for Red Sonja and countless iconic Italian and American movies. Admittedly, it was a bit hard to pay attention to the English sub-titles as the artist’s posters shown throughout were so eye-catching!

My enjoyment of Red Sonja hasn’t waned and if anything, my love for this fictional period on Earth’s history is reinvigorated; an age undreamed of with self-proclaimed kingdoms, wizardry and adventure, the essence of which this film captures beautifully in just 89 minutes.