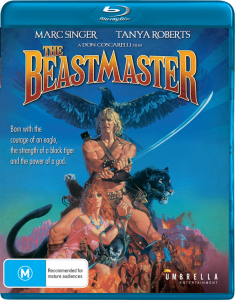 Needless to say sword-and-sorcery was a staple of 80s cinema. From the savage revenge quest of Conan the Barbarian to the more family-friendly The Princess Bride, it’s a genre that caters to a wide audience. Don Coscarelli’s (Phantasm) The Beastmaster falls between the tone of those two films and has recently been re-issued by Umbrella Entertainment on Blu-ray, much to the joy of many. When a young man’s family is murdered, he sets out for revenge against a dark army lead by an evil sorcerer (sound familiar?), aided by two ferrets, a black tiger and one majestic eagle.

The Beastmaster is a fairly cheesy adventure that unfortunately lacks the budget of its more popular counterparts. However, it succeeds in telling a fantasy-rich story filled with a variety of characters and imaginative set pieces; taking place in a world of vast landscapes and exotic locations. Our hero, Dar, played by a shirtless Marc Singer is a capable lead with likable sensibilities, who gives his best even during some of the film’s less inspired scenes. Dar’s relationship with his animal companions is both affectionate and at times amusing, while his human friends, most notably Seth (John Amos) and Kiri (Tanya Roberts), provide support and comradery on his journey. Rip Torn hams is up to full throttle as the evil Maax, a villain more ridiculous than intimidating, although well in line with the film’s frivolous quality.

Despite a few noticeable dips in quality, the transfer overall is great on both fronts with strong colours and a DTS HD audio track, befitting to the film’s momentous scoring.

We all get a little buzz when we see a long list of extras, but often a good commentary and a decent featurette is all you need to for a behind-the-scenes education, which this edition certainly provides.

The Beastmaster represents a portion of many of our childhoods, when escapism through film came so easily. Since its release over 35 years ago, the genre has changed, becoming far more sophisticated, but thanks to Umbrella Entertainment and many labels like them, this whimsical art form will never perish.

Note: Umbrella Entertainment have also released this film on Umbrella On Demand.