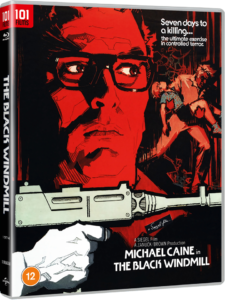 Don Siegel was one of the most competent and consistent filmmakers of his generation, who, during the latter half of his career, made Clint Eastwood a bona fide Hollywood movie star with Dirty Harry. After four collaborations with Eastwood and the box office disappointment of Charlie Varrick, Siegel crossed the Atlantic to direct the British spy-thriller, The Black Windmill, which is out now on Blu-ray in the UK from 101 Films.

When his son is kidnapped, former soldier turned government agent, Maj. John Tarrant (Michael Caine), must pay a heavy ransom, which connects to a recent acquisition by one of Tarrant’s superiors indicating the possibility of a mole within the ranks of MI6.

I’ve seen The Black Windmill twice; first in mid-2019 and just days ago as a refresher for this review. Watching it again so soon proved to be just as enjoyable as my first viewing, which I attribute in part to the film’s runtime of 105-minutes, a perfect length for a feature of this design. Michael Caine, however, is the main reason why you should seek it out. No one will argue that he’s a terrific actor to watch on screen, but it’s his dramatic work that’s really something else. Caine harbours an anger that’s quite terrifying when he lets it out, and while his performance is very restrained as Tarrant, befitting to the well-trained spy, you can see him boiling away beneath the service.  Tarrant’s scrupulous boss, Cedric Harper, played by the magnificent Donald Pleasence, whose agitated and twitchy performance really does a number on one’s nerves; places you in Tarrant’s shoes as a desperate and frustrated father. The Black Windmill isn’t Don Siegel’s best film and feels very by-the-numbers at times, but it’s deadly serious in tone and the carefully crafted plot, that’s relatively light on action, is what keeps the viewers engaged; on top of a solid cast of characters. Despite a somewhat rushed ending, we have a very stock-standard genre piece, but one that’s expertly made and would serve as the perfect template for filmmakers wanting to steer clear of the James Bond-style of espionage cinema.

The Back Windmill was shot in Cinemascope 16:9 (2.35:1), which would have been a treat to see in theatres and while big-screen televisions do help replicate the effect, the image itself is a little underwhelming. It certainly meets the criteria of 1080p, but with higher grade restorations and masters now widely available, this transfer appears quite dated, with colours a little under-saturated and the picture not being partially clean. Sound, however, fairs a little better despite the Mono PCM track, but offers considerable volume which I’ll gladly take over some more immersive. 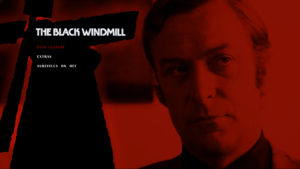 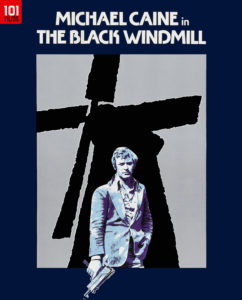 Separating itself from previous releases, this edition of The Black Windmill comes with two exclusive interviews with cast and crew members. First up, is a short sit-down with veteran character actor, Joss Acklund. Despite being in his early 90s, Ackland is very talkative about his career, and while many of his sentences end with, “I don’t remember”, he recalls that he was making three films during the production of The Black Windmill as well as several other informative, and at times amusing anecdotes about his co-stars.

One thing The Black Windmill really had going for it was the cinematography by Ousama Rawi, who talks for roughly 20-minutes about his overall experience behind the scenes while divulging a little insight into Donald Pleasence’s approach to acting. Ousama also recounts an unfortunate accident while filming inside the film’s titular location, making note of the dangers stunt performers can face when working without pre-fabricated set pieces.

Artwork utilises two theatrical posters of the time, which are similar in style but present a nice contrast in color and in regards to consistency, the menu screen reflects the featured and more stylish red and black design.

101 Films I feel recognises the value of The Black Windmill, which is reflected in their modest release that will hopefully entice some classic film fans to make a blind purchase of £12 ($21 AUD) a reasonably priced Blu-ray in today’s market.