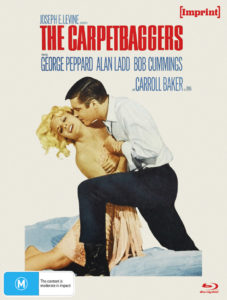 Much like the film itself, The Carpetbaggers, proved to be a very hot item when it hit Blu-ray from Imprint Films, No. 9 in the label’s second wave, selling out rather quickly. Upon watching and reading about the film, it’s demand is really no surprise as this heated adaptation of Harold Robbins’ best-selling novel, pushed the envelope and is now considered a landmark film of the 1960s sexual revolution.

George Peppard stars as Jonas Cord, a character loosely based on Howard Hughes, who after his father’s sudden passing quickly becomes one of the richest men in America by sheer ruthlessness alone. Cord’s tycoon and playboy image is front and centre for the entire picture, with no debilitating mental afflictions like the more eccentric Hughes, who eventually became his own prisoner. If anything this very brash character examination can be seen as an example of what Hughes might have become if he wasn’t limited by his aforementioned aliments, and would it have been for better or worse? Although, it slowly becomes apparent that Cord has chink in his armour, which I think could have been more developed as it may have prevented an immediate dislike by the viewers. However, those in Cord’s orbit, like his seductive step mother and sexual conquest, Rina, falls victims to his numerous power-plays; along with family friend, Nevada Smith, played by Alan Ladd in his last film role who literally goes out swinging. Elizabeth Ashley as Monica Winthrop, Cord’s wife, becomes the object of her husband needless cruelty when she encourages him to settle down into a life away from hotel suites. She’s a radiant presence, like her other female co-stars, although she avoids being drawn into the aura of sadism, that’s very prominent for a film produced during the mid-60s. The Carpetbaggers encompasses the glamour of 1930s Hollywood in almost every frame with stunning costumes worn the by cast, created by the eight-time Oscar winning designer, Edith Head. Performances from the cast are all very strong with Peppard giving his all as the unsympathetic lead, while Carroll Baker lives up to her to her ‘sex-symbol’ image as Rina Marlow, a Jean Harlow type actress, who Baker would later portray in a biography feature the following year. Alan Ladd’s performance is somewhat bittersweet in light of his untimely passing, whose character of Nevada Smith is one of the film’s only voices of reason and compassion. I enjoyed The Carpetbaggers, but the biggest drawback is that the film is half an hour too long, spending too much time getting is message across after it’s already become clear. Other than that, it’s a very stylish collection of Hollywood talent at the time and manages to entertain in more ways than one.

Considering this Blu-ray is a debut release, it holds up well against a trend of restorations from 2K and 4K, that’s becoming standard practice for HD distribution. Colours are rich and vibrant while the ultra-sharp and detailed image literally dazzles throughout many scenes. Elmer Bernstein’s triumphant score sounds magnificent through the 5.1 DTS-HD track, which offers loud dialogue that remains audible and isn’t offset by music and sound effects. It’s well-balanced, and the optional 2.0 LPCM track offer the same quality, but is of course less immersive.

Imprint’s classy representation of their catalogue certainly matches the glamour of The Carpetbaggers with artwork that epitomises the films’ aggressive and risqué tone. With only a commentary as bonus material, Kat Ellinger’s assessment is worth a listen and may change your mind or attitude on a few things about the long-winded drama and its character. 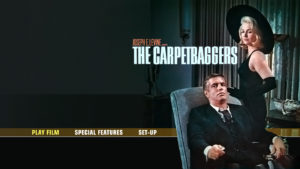 While it’s sold out at Imprint’s online store, you can still find a copies of The Carpetbaggers floating around JB Hi-Fi outlets, and you can order it direct from the retailer’s web site. It’s certainly worthy of being a limited edition and should you decide to pick it up, you’ll have something that will be only increase in value. 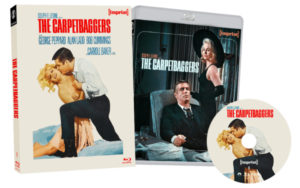