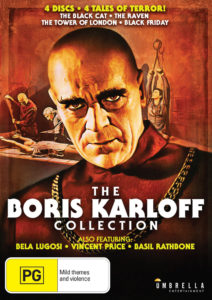 Umbrella Entertainment has put together their own Boris Karloff Collection on DVD, perfect for those coming off their Halloween horror-binge, featuring gothic classics, The Back Cat and The Raven, along with two dramatic thrillers in the form of Tower of London and Black Friday. Spanning the course of six years in the screen icon’s filmography, each distinctive feature offers fans a unique experience.

Cinemassacre founder James Rolfe has an infectious love for horror films of this era and cites The Black Cat as one of his favourites outside of Universal’s tentpole, Dracula, Frankenstein and Wolf Man series. It’s definitely more on the obscure side, despite being generally well-known by film fans and edges towards darker material in regards to satanic worship and torture. Our honeymooners aren’t really significant to the plot, which is quite flimsy, they’re more of a means for Karloff and Lugosi to face off in what begins as a game of wits, later become something a lot deadlier. Lugosi is Hungarian psychiatrist, Dr. Vitus Werdegast, who seeks the whereabouts of his wife and daughter. He believes they were taken by an old friend, Hjalmar Poelzig (Boris Karloff), an Austrian architect during what was presumably World War 1. It probably won’t come as a surprise that the titular black cat is nothing more than an object of paralysing fear for certain characters. Much of film’s value comes from its visual style and architecture, which has a very striking modern fare. Ink black shows and haunting set design help create a haunting atmosphere whilst hinting at evil the undertones that come more into play towards the film’s climax. Karloff and Lugosi play off each other well, two formidable figures of equal measure and their final scene together takes an unexpectedly graphic turn.

The Raven has Lugosi playing the brilliant surgeon, Dr. Richard Vollin, who of course is harbouring a secret madness and likens himself to Edgar Allan Poe.  After he saves a beautiful woman from near death, he becomes obsessed, but soon learns he can’t have her. Enraged, Vollin then hatches a cunning plan involving a sympathetic criminal, Edmond Bateman (Boris Karloff), who he manipulates as a tool for games of torture. While I enjoyed The Black Cat, I have to call The Raven as my pick for this set, even if it’s just for Lugosi reading from Poe’s haunting poem. Through playing a fan-driven mad by admiration, the actor gives off a very commanding presence on screen, but also has moments of sheer maniacal joy while honing his craft. Boris Karloff, who for years shared a mutual rivalry with Lugosi is excellent as Bateman; a lowly man at the mercy of his unflattering looks, but has a desire to do good. Their scenes together are among the best in the entire film, and while their respective characters vary, they’re evenly matched as actors. Much like the previous two films, the set design is a real highlight, exhibiting more of that modern-style architecture seen in The Black Cat, adding a lot of atmospheres next to Vollin’s dungeon of horrors where the film’s nail-biting climax take place. 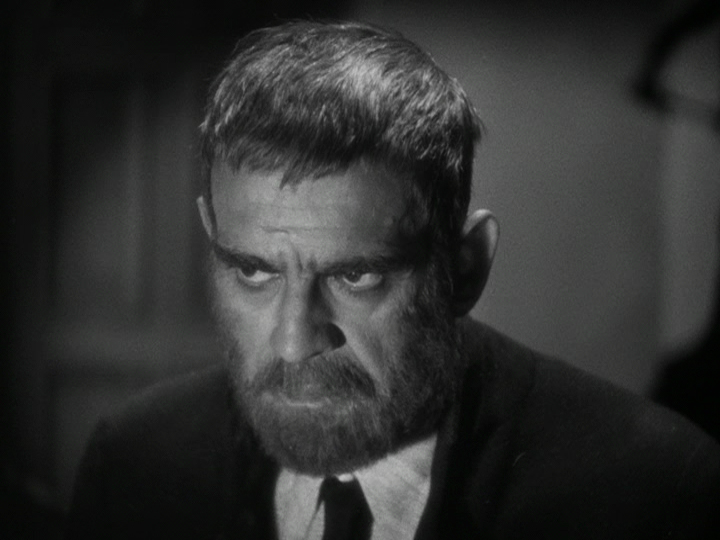 If you enjoy House of Cards or shows of that nature, then Tower of London is the prototype, which stars Basil Rathbone as Richard, Duke of Gloucester (the OG Frank Underwood) destroying his brother’s, King Edward IV, kingdom from within; aided by the literal executioner, Mord, played by Boris Karloff. This is a very crafty medieval drama with a deliciously sinister plot with Rathbone at its center, who is brilliant as the lowly member in the line of succession. While it’s loosely based on true events, namely ‘The Princes in the Tower’, some obvious liberties are taken given the story’s age disputed facts, but it’s a really fun movie that doesn’t make you feel bad for getting behind Richard’s quest to steal the throne. He the perfect village and Rathbone’s performance is incredible and having never watched the actor before, I’m glad the Tower of London was my introduction. Vincent Prince in an early supporting role as the Duke of Clarence is very memorable, already showing signs of the beloved performer and star he’ll later become, while Karloff hones his craft as a ghoulish and obedient Mord, who you could say is the ‘Doug Stamper’ of the film, to again reference House of Cards. Black Friday is my pick of the set. It’s far from a straight horror film, but its drips the type of evil and deception that’s become very popular in this age of cinematic television. 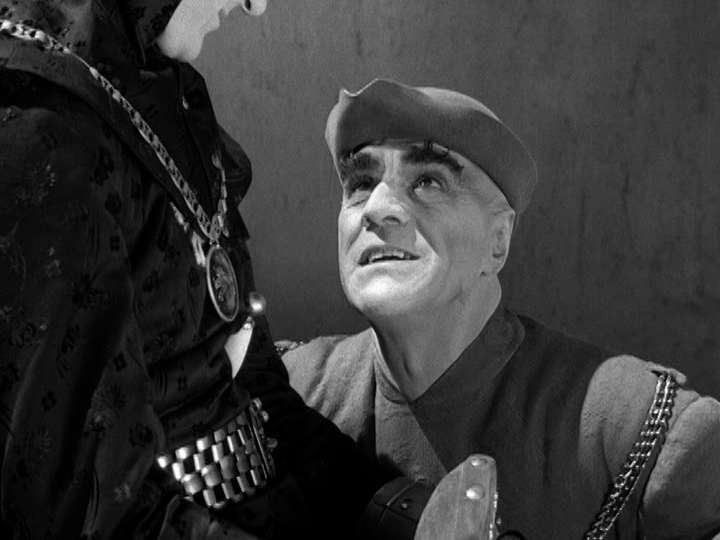 Merging into the sensationalized crime genre, Black Friday is a Jekyll & Hyde type story in which Karloff plays the very exceptional Dr. Sovac, who transplants the brain of a recently slain gangster, Red Cannon, into the body of a close friend to save his life. Of course, this makes for an entertaining duality when Sovac learns of some hidden loot belonging to Cannon, the search for which triggers the criminal mind inside his friend. Granted the film is different from your usual Karloff affair, it’s enjoyable thanks to its high concept, despite being a little silly at times, and Bela Lugosi joins the supporting cast as a vengeful mob boss. Karloff plays the role of Sovac as a well-meaning individual, who comes across as very genuine and caring, but the lure of wealth soon corrupts and the hole he digs for himself through the film is tragic in light of his initial intentions. Some might say that Black Friday doesn’t fit the image we have of Karloff as a face of horror, but there’s nice hint within his character, even though he’s the protagonist. 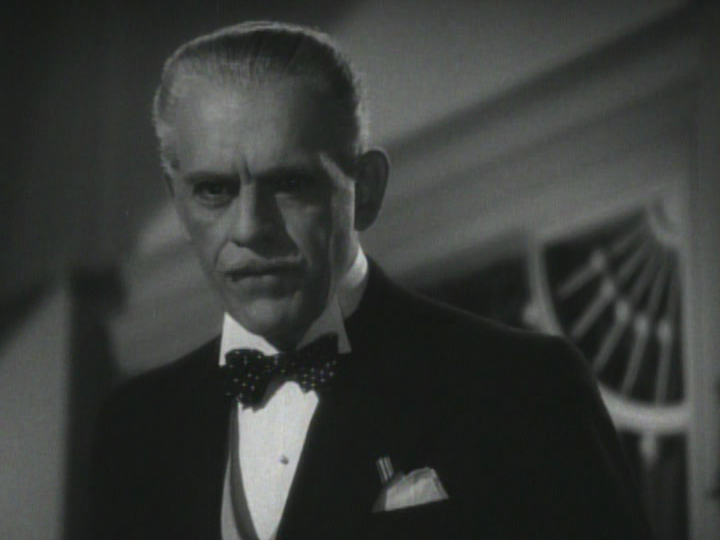 While good value for money, these collections sets are generally stock standard items, with just the films and nothing else. Umbrella’s cover design offers a fitting aesthetic to the four black & white classics with disc art very reminiscent of the old VHS releases under Universal from the 1990s. However, I was puzzled by the use of five-pack DVD set, when the package only contains four films. I guess Umbrella had an abundance in their warehouse, but it looks odd. Image quality is fairly consistent, upscaling nicely on HD screens with the exception of Black Friday, which looks to have been sourced from a sub-standard master judging by the very “video” presentation. Presented in 1.33:1, the region 4 encoded set offers a basic Dolby 2.0 Mono track for each film which is perfectly serviceable.

Umbrella Entertainment has exceeded my expectations with this four-movie set, which is a good jumping-off point if you’re new to the Boris Karloff experience, which shows the range and presence of the unmistakable face of terror. 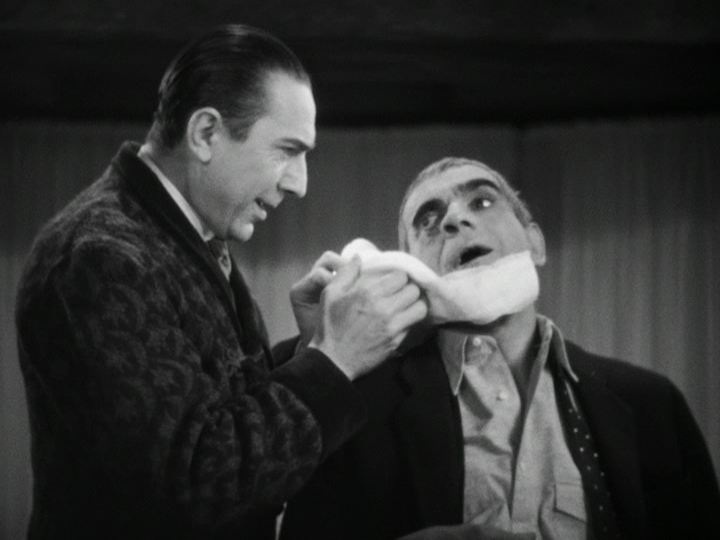 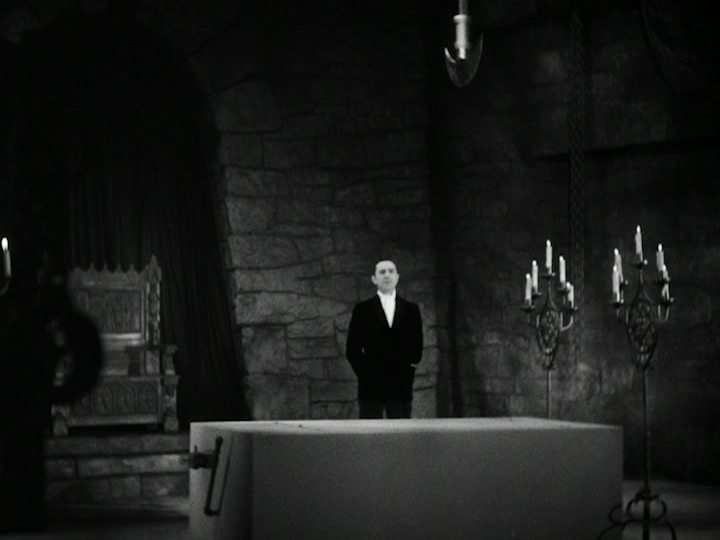 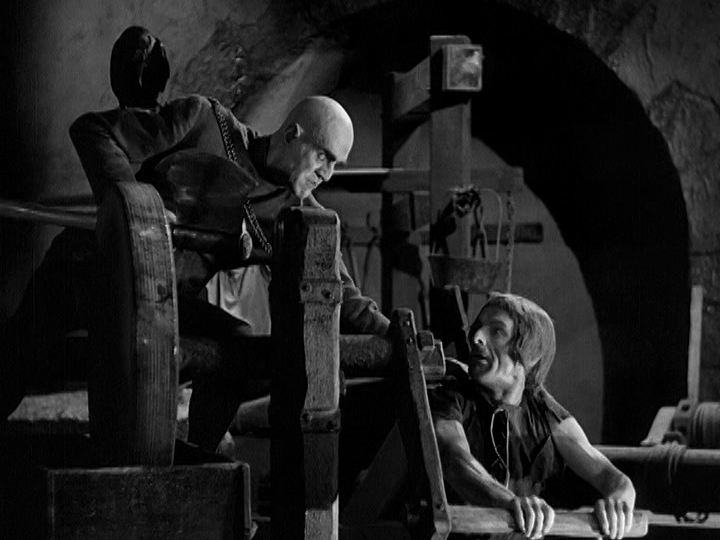 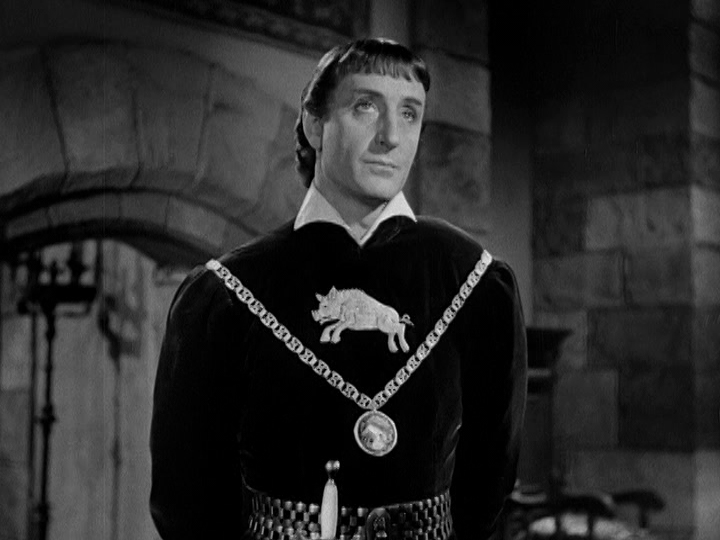