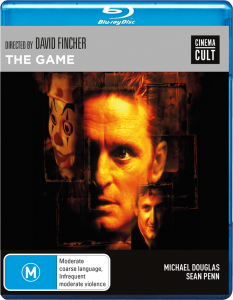 David Fincher’s third feature film doesn’t come up in conversation as much compared to his more popular works despite being the object of much praise from critics and fans. The answer to this probably lies in it being wedged between Se7en and Fight Club, but now The Game has found a suitable home in Australia’s physical media market under the dedicated label Cinema Cult.

Michael Douglas stars as a wealthy investment banker, Nicholas Van Orton, a man with seemingly everything who lives contently in emotional isolation. On his 48th birthday, our lead’s younger brother Conrad (Sean Penn) gifts him a mysterious voucher to participate in a game that quickly encroaches on every facet of his life, blurring the line between reality and make-believe.

What can I say without spoiling the plot? Well, there’s a Charles Dickens quality to our protagonist, Nicholas, who is somewhat of a modern Ebenezer Scrooge. He’s not overly mean, but his very structured and work-oriented attitude doesn’t make him the most pleasant person to be around either. When Nicholas reluctantly pulls the trigger on his brother’s unconventional gift, you can’t help but feel it’s ultimately for his benefit, no matter how extreme things get. The Game encourages viewers to pay strict attention to what’s happening on the screen, specifically to ambiguous lines of dialogue and set pieces, which serve as brief moments of foreshadowing. As an action-thriller, the film moves at a breakneck pace, mostly during the first half with a number of death-defying sequences that really put Nicholas through the wringer; adding to not only his, but the viewer’s, growing paranoia. How elaborate can a plot be before the average person questions it? That’s a thought that frequently pops up during the feature’s runtime, cleverly distracting us from trying to solve the mystery before the climax where all is revealed. Michael Douglas is quite restrained in his performance as Nicholas, even during more intense scenes, and while he’s not very likeable initially, we remain firmly on his side. There’s a deep-seated pain to his character that isn’t really explored, but viewers are given enough to paint an accurate picture. Sean Penn shows up briefly throughout as the less constrained Conrad, whose seemingly innocent gesture of kindness and drastic change in demeanour between appearances adds to the overall mystery. Meanwhile, Deborah Kara Unger is the “White Rabbit” of the film, alluded to by Jefferson Airplane’s LSD mantra.

It’s a safe assumption that Cinema Cult’s release of The Game was sourced from the standard Universal edition from 2015, which rates fairly well on Blu-ray.com and deservedly so. Region B encoded, the 2:35:1 image has a darkened quality, but that’s more the style of Fincher’s signature aesthetic which shows up well in high definition, creating a very specific ambience that fits somewhere between neo-noir and an ultra-modern dreamscape. Sound is shockingly loud in Dolby 5.1, which I didn’t mind at all considering the number of times I’ve had to deal with frustratingly low dialogue. Overall, it’s a consistent immersive track, although there are no English subtitles included.

If you’ve never seen The Game before, then Cinema Cult’s release is an Aussie film fan’s most viable option on physical media, whether it be a one-and-done deal or one for the ‘re-watch’ list to find clues you missed the first time around.