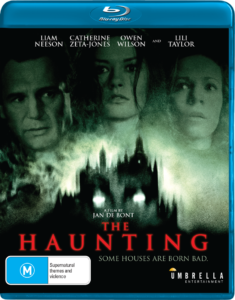 I remember there being a lot of buzz surrounding The Haunting as its release in cinemas grew closer. Much of the hype was built around the use of “cutting edge” digital effects and that fact it was from director, Jan de Bont, who previously gave us the action spectacles of Speed and Twister. After being critically panned and enduing eight Razzie nominations, the film has resurfaced on Blu-ray from Umbrella Entertainment so it’s time to re-evaluate 1999 summer blockbuster.

When three strangers decide to take part in a sleep study at the all but abandoned Hill House, they begin to experience sinister occurrences from beyond the grave after learning about the house’s past history. If you’re watching The Haunting by yourself, the glaring issues with the film will only hinder your enjoyment, so I recommend viewing with one or more people to help embrace the problematic elements. It’s very clear that this horror-mystery was intended as a treat for the senses, both visually and audibly; and the film mostly succeeds in that regard, especially with its use of sound. However, a very lacklustre screenplay and an over-use of digital imagery prevent the film from being more enjoyable and unfortunately really take away from the incredibly detailed set design of Hill House, that’s very much its own character. Having said all that and this will no doubt be controversial for film purists, but I enjoy this remake over its 1963 original of the same name. Partly for the film’s stylised approach and the characters who are not so insufferable, despite being a little one dimensional. Liam Neeson as the man heading up the study, Dr. David Marrow, serves well as a sceptical supporting character, while his male counterpart Owen Wilson as Luke Sanderson brings some light comic relief. Deserving of much praise is Lili Taylor as our susceptible lead Nell, who despite the cheesy material gives a strong performance alongside Catherine Zeta-Jones as an attractive participant, Theo.

Despite there being no menu screen or bonus material, The Haunting looks great and sounds better than ever on a Blu-ray disc that I suspect is ‘Region Free’ even though it’s labelled as B. Without getting technical, the 2.35:1 image is simply vibrant offering nice clarity between the wild array of colours that paint the interior of Hill House. Say what you will about the film itself, but the sound mixing is phenomenal and translates well to the home theatre experience; in fact, it might even entice you to upgrade some of your equipment. Although, even if you have a basic sound system, you’ll still be impressed by the immersive quality of the 5.1 DTS-HD Master Audio track, which is perfect for any movie about a haunted house.

The Haunting takes itself too seriously even though it was aiming to be an in cinema thrill ride. Perhaps if it had embraced the ‘haunted house’ novelty more like the remake of House on Haunted Hill it may have fared better with audiences. It is, however, definitely worth a re-watch if it’s your first time since the film’s release.