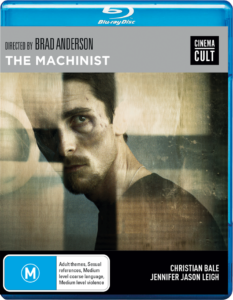 Sixteen years doesn’t quite qualify a film for ‘classic’ status by its technical definition, but I think some exception can be given to The Machinist, which really made a mark on audiences, especially enthusiastic horror fans back in 2004. Now on Blu-ray in Australia under Shock Entertainment’s sub-label, Cinema Cult, the semi-independent psychological thriller holds up well and certainly hasn’t lost its value as an after-hours mystery.

Christian Bale stars as a factory machinist, Trevor Reznik, who suffers from insomnia, claiming he hasn’t slept for in almost a year. Disturbingly thin, our hero’s life is one of routine; between work, he finds comfort in the arms of a prostitute, Stevie (Jennifer Jason Leigh), and enjoys late-night coffee at an airport diner while conversing with a waitress, Maria. After an accident involving a co-worker, Trever suspects there’s a plot against him, as he finds ominous clues and encounters a mysterious stranger, Ivan, who seems to have the answers. I don’t sleep well every night, but I sleep, so I can only imagine what insomnia is like, not to mention the physical and mental toll it can take. Christian Bale’s frail and almost ghostly appearance, which he achieved by simply not eating, is a sight that never ceases to be shocking. Paranoid, lonely and suspicious, his world is seemingly forever under a grey cloud that’s slowly bearing down on him, which may or may not be his own doing. Aesthetically, The Machinist adopts a very neo-noir style spliced with Hitchcock’s Touch of Evil and its many low angle shots create an almost alien environment. This otherworldly ambience is amplified by a soundtrack out of 50’s science-fiction via the use of an electro-Theremin. Symbolic imagery throughout the film works more on a subliminal level, but also quietly steers the narrative. Bale is dangerously dedicated as Reznik; his bony structure enhances his facial expressions to the point where they’re almost comical, and despite his pleasant demeanour, his performance is very strained. Jennifer Jason Leigh as his casual companion, Stevie, gives warmth to what is a very cold screenplay as does waitress Maria, played by Spanish actress Aitana Sánchez-Gijón. Meanwhile, John Sharian as “Ivan” is jovially creepy and eclipsing in size next to the ultra-thin Trevor.

Much like in the early days of Cinema Cult, they’ve gone for a straight port of a pre-existing release, and in this case, we’re talking about Paramount’s premium 2009 Blu-ray edition. Unfortunately, the technical specs on the cover’s rear do not accurately represent what’s on the disc, so I’ll give you a rundown. Despite being labelled as Region B; I would not be surprised that if the disc is in fact Region Free, which is presented in 2.36:1 widescreen. Subtitles are included, in English, French, Portuguese and Spanish; while audio is in Dolby 5.1 across the board in English, Spanish and French. The Machinist has a very specific colour pallet, which shows up incredibly well in 1080p with a nice matte finish and deep blacks during night scenes of which there are plenty. Much like the image, the sound is very specific, especially the very instrumental music, that resonates beautifully with surround sound. 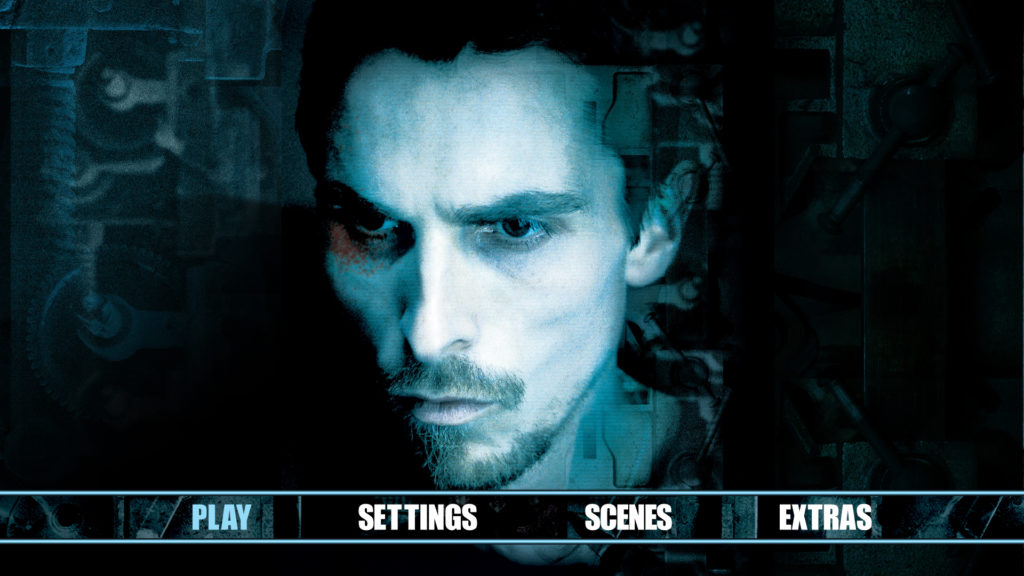 Amounting close to 90-minutes of bonus content, don’t even think about checking them out before watching the movie as they are chock-full of spoilers. The three featurettes give a nice overarching history of the film’s production, and Hiding in Plain Sight really shows how clever the film is with its many visual clues and references. Breaking the Rules contains a lot of on-the-set footage, including a full mechanical scene breakdown, plus interviews with the cast and crew. Overall, the Blu-ray release is very much the full package that gives The Machinist the exposure it deserves.

I first watched The Machinist in 2012, yet somehow forgot all the significant plot points, so this recent re-watch was like a first-time viewing, and what an immersive experience it was and I feel that it can be enjoyed again and again after you know all the answers. It’s a bleak and at times, darkly comedic, jigsaw puzzle perfect for late-night viewing.