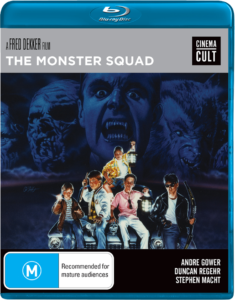 Cinema Cult came out swinging in September with a massive lot of eight titles released on Blu-ray and DVD, including Fred Dekker’s horror-homage classic The Monster Squad for the first time in Australia. Co-written by Shane Black (The Predator), a group of kids with a mutual love for the Classic Universal Monsters must band together to save ‘Anytown’ USA from Dracula and his recruits: Wolfman, Frankenstein, The Mummy and Gillman.

Cinemassacre’s Rental Reviews series featured the horror-fantasy in their October 18th episode, which offered differing perspectives between two long-time fans and one who had just watched the movie for the very first time. I’m of the latter, having watched it last week, and while I can recognise why The Monster Squad is popular among a certain demographic, the flaws are quite glaring. It’s an enjoyable film and very easy to watch over the 79-minute runtime (not 89 minutes as printed on the sleeve), but you don’t get much more than the premise, and of course, the novelty of the assorted movie monsters. I think the monsters themselves were done well; they’re instantly recognisable but have been appropriately enhanced for the 80s. However, screen time is not evenly shared with Dracula, played by Canadian-born actor Duncan Regehr, being by far the most prominent villain of the film. Mummy, Gillman (my favourite) and to a lesser extent Wolfman are mainly footnotes in the very flimsy story that revolves around elements commonly found in classic horror movie lore. Our child characters have a Goonie-esque thing going on, which isn’t surprising, but their personalities are not as nearly distinctive nor are they very developed. Younger audiences probably wouldn’t have an issue with this factor, then again while The Monster Squad aims its intended fun at youngsters, the blood, violence and language is clearly more for adults. Dracula furiously calls a 5-year-girl a ‘bitch’, right to her face, which is both hilarious and somewhat jarring. Stan Winston’s make-up and animatronic wizardry bring the more beastly monsters to life and they look fantastic, especially Gillman who takes on a more primate facial appearance while sporting a very lean humanoid torso compared to his 1950s counterpart.

The Monster Squad has seen only seen two Blu-ray releases within the United States since 2009, both of which offer the same quality in regards to sound and vision. Cinema Cult appears to have sourced their release from the same master, which is an overall impressive 2.35:1 presentation. Although, I found it a little dark during night scenes, which is a large portion of the film but strong colours help to show off the high level of clarity and image sharpness; while mild film grain keeps the HD rendering from looking too polished. Sound is in 2.0 AC3 Dolby Digital and is perfectly serviceable, but is rather flat for an audio track which has a rich abundance of sound effects.

The Monster Squad will always have its fans and will no doubt win some new ones in light of its induction into Cinema Cult’s physical library. Created by people who love movies, you can feel cherished sentiments through the innocence of our young heroes as they plot to battle evil from their treehouse.