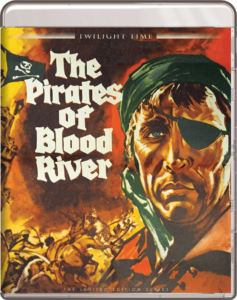 Captain Clegg was my first escape to the select group of films often referred to as ‘Hammer’s Pirate Movies’ and remains one of my favourites from the British studio. Now thanks to Twilight Time Movies I’ve recently been able to enjoy The Pirates of Blood River, which follows a tattered band of ruthless pirates who attack a relatively peaceful Protestant settlement on the Isle of Devon where they relentlessly search for treasure to fund their lawless exploits.

Christopher Lee leads the marauding pirates as the Captain LaRoche, a ruthless Frenchman who’s rather elegant in contrast to his men, of whom he appears bored by their antics, but clearly needs their vigour and energy as a means to an end. Twilight Time’s own Mike Finnegan has labelled the film “The Pirate Movie with No Boat” in piece published online, which is essentially what The Pirates of Blood River is; much like how The Force Awakens is Star Wars without the stars. However, I don’t think the film suffers for it, apart from the title being slightly misleading given the nature of most pirate movies. We first meet LaRoche on-board his ship as it lays anchor off the island’s shore, which is a gorgeous set-piece that we only get to see in a fleeting moment. Once on land the film really picks up speed with an intense standoff between the settlers and approaching pirates; then things take quite a nasty turn as LaRoche and his men seize the village; mercilessly tormenting their captives into revealing the location of a hidden treasure that may or may not exist. Strangely, the film is categorised as a “romance” on Blu-ray.com, so make of that what you will. While the depiction of good versus bad is for the most part black and white, we learn early on that the people of Devon have become alienated from the outside, mostly stemming from the strict attitudes of Smith, a prominent elder and the father of our protagonist Jonathan, who has been harshly punished for adultery. It’s a scenario that begs the question; is it better to have freedom without laws or to be prisoners with laws?

Presented in 1080p (MPEG-4 AVC) high definition and 2.35:1 widescreen, The Pirates of Blood River looks especially sharp, showing off in rich detail the film’s exotic location of the fictional “Isle of Devon”, despite being shot primary in Buckinghamshire, England. Hammer have always made great use of colour, and in this case, the bright assortment worn by our pirate antagonists brings a subtle Caribbean aesthetic that shows-up nicely HD. The Pirates of Blood River is set for new Blu-ray release within the UK market, although I can’t image the transfer exceeding what Twilight Time have managed to deliver, so if that’s not a strong enough endorsement I don’t know what is.

Have you ever seen those music videos ‘without lyrics’ on YouTube?  Well, that’s what the isolated effects track is like. While impressive on a technical level, it’s simultaneously the most hilarious and awkward thing I’ve heard …or not heard. Julie Kirgo offers up another informative essay on the film in a standard 6-page booklet, which features art from the film’s theatrical poster of a nameless pirate aggressively carrying off a distressed woman, alluding to the film “romantic” element no doubt. If you fancy yourself a scholar of Hammer Films then the audio commentary is well worth a listen, especially for Jimmy Sangster’s input. 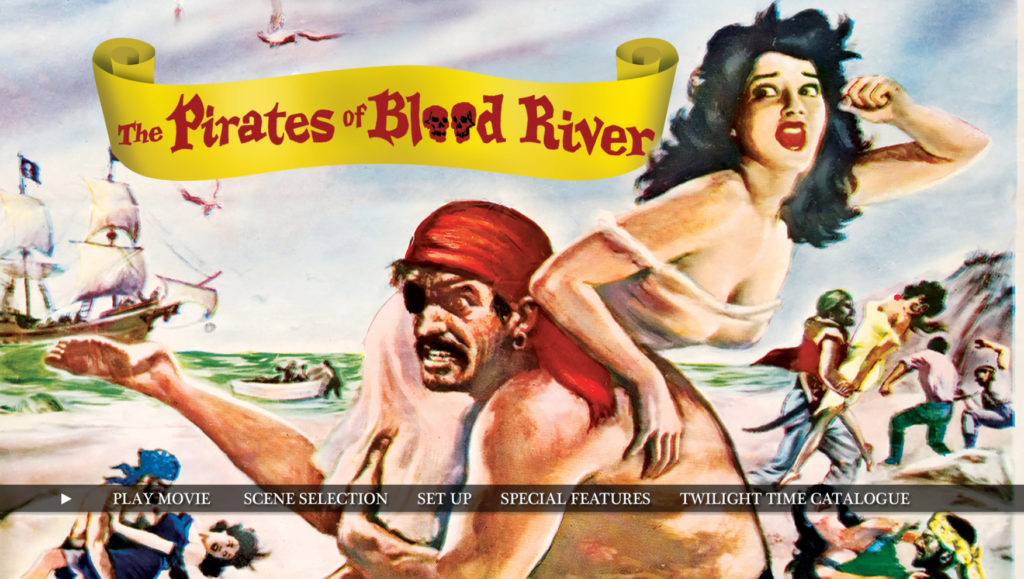 Christopher Lee is terrific as LaRoche, a sinister individual but civilised in a manner that keeps him distinguishable from his fellow pirates, including his rowdy First Mate, Mack, played by Hammer regular Michael Ripper and a young Oliver Reed as the ill-tempered Brocaire. The Pirates of Blood River is a lot of fun, fast-paced and fairly light in terms of story, but skewed a bit more away from family viewing in regards to violence.