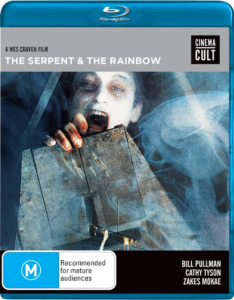 I can still remember quite vividly the poster for The Serpent & the Rainbow hanging in the window of my town’s once prosperous video store. Call it my introduction to horror as the sight of a ghoulish Bill Pullman clawing out of a coffin was an image that fractured my fragile 4-year-old mind. It wouldn’t be until 2015 when I finally sat down to watch the Wes Craven’s sophisticated classic, which has been revived on Blu-ray by Australian distributor Cinema Cult.

When a pharmaceutical company catches wind of a drug used in Haitian voodoo practices to supposedly create zombies, they send Harvard anthropologist David Alan to the Caribbean nation to investigate the mystery concoction. By the late 80s it was only a matter of time before Wes Craven dabbled in the world of the undead. While he could have easily followed the lead of George A. Romeo by serving up something popular and familiar to horror audiences, he chose a rout which offered real-world elements. Despite the alternative approach, we’re presented with a typical fish-out-of-water scenario. Our protagonist David, played by Bill Pullman, is plunged into a nightmarish world where ancient culture seeps into nearly every facet of life. Plagued by corrupt law enforcement and the mind altering effects of the black magic he carelessly flirts with, it’s hard to make head or tails of what’s actually happening and Craven makes the experience purposely disorienting to the viewer. Horrifying visuals and some truly bizarre sequences play wildly on the senses and the film as a whole is especially well directed. Bill Pullman’s every-man quality makes his very suitable for what was his first leading role, one which I’m sure was very enticing. His performance is both jarring and realistic to his unusual situation.

Presented in a very stock-standard manner, The Serpent & the Rainbow pales slightly in comparison to various releases available overseas. Picture is adequate for Blu-ray, while sound frustratingly low in Dolby 2.0. However, for a simple pop-in-and-play edition it’s great value for money.

If you’re after a slice of cinematic zombification removed from the brain-eating variety, then I highly recommend The Serpent & the Rainbow, which covers ground that hasn’t really been explored to a such a degree since the Val Lewton’s classic I Walked with a Zombie from 1943. It strays from the norm and frightens in ways you won’t expect.